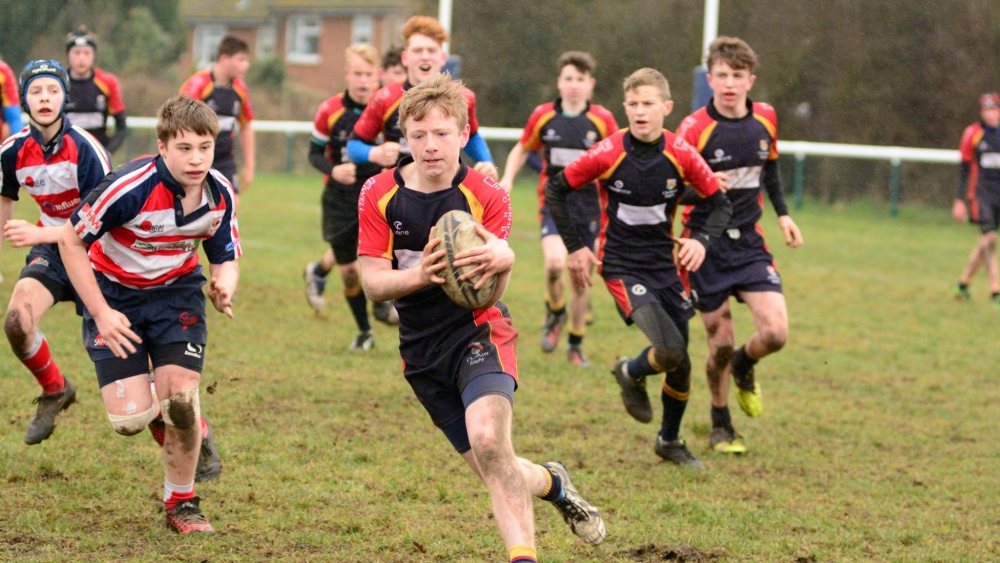 Chobham u14s hosted Dorking A and B squad in a friendly fixture at Fowlers Wells on Sunday afternoon. With both visiting squads boasting some big lads it was obvious this would be a good test for the two home sides.

The game kicked off following a quick game of rock, paper, scissors in lieu of a coin toss with Chobham immediately setting out their defensive stall and keeping Dorking pinned back in their own half. A good scrum allows the backs an early run but good pressure from the Dorking threes means Doug had to kick for territory. The kick chase was effective and Dorking conceded a lineout in their 25. Setting up a ruck from the catch Dorking showed early on what one of the strengths were by driving Chobham off the ball and countering from deep. MattN was able to pinch the ball back however and Fin was away on a strong run with support from Jack and Connor taking play back close to the Dorking line where the visitors had put in at a scrum.

Pressure in the tight was translated into pressure on the halfbacks as a loose pass was spilled behind the try line and Gideon reacted quickly to open the scoring, Doug adding the two points for an early 7-0 lead.

Chobham had a penalty following the restart, but a good leap from the Dorking winger left the ball in play and gave them the chance to counter, winning a penalty themselves in the Chob half. A quick tap kept the momentum up and reached the home 25 for the first time before being driven into touch. Dorking kept Chob pinned in their own half, more than matching the home side at the breakdown and trying to work a gap in the defence and create an opening. A scrum against the head relived pressure and a tap penalty down field put Oli into space, finally being hauled down about 5 yards out.

Dorking managed to create space for the big winger to have a dart at the defence and was too big for several tackles before being brought to ground well into the Chob half. Dorking continued to press and earned a penalty close to the home goal line. Opting for the lineout it was obvious they had a plan in mind. A long throw with a big forward on the loop was that plan but again Chobham’s determination to stop the score came to the fore. Despite going through several phases the thin blue (and red and yellow) line wasn’t breached as the big wing was bundled into touch by Harry and Jack. The lines couldn’t be cleared as Dorking earned a scrum but another steal from Charlie and co allowed the ball to be punted upfield as the half finished at 7-0.

The early stages of the second period were pretty even as both teams tried to create a platform, Dorking putting boot to ball on several occasions looking for territorial gains but the Chob back three were able to return play to where it started. Dorking however were able to prevent the backs making much headway from first phase, and what could be a crucial second score didn’t look like coming any time soon. That score did come Chobham’s way though as Dorking persisted with kicking away the ball. Jack gathered around halfway and set off on a wide arcing run towards the left wing. He was stopped 10 yards out but managed to get a pass away that Doug picked off his toes and cut back on an inside line towards the try line. The defenders just held him up but a cheeky back handed offload to Tommy who was right on his shoulder beat the hoops and added a second try, converted this time by Gideon for a 14-0 lead.

Dorking came back strongly and a rare charged down kick put Chob on the back foot before making a clearance at the second bite.

Dorking pulled out all the stops in an attempt to hit back but as in the first half the tackling was a match for them as Dorking were unable to turn phases of possession into points. This was trademark Chobham terrier defence, forcing play upfield despite not having the ball with Fin and Adam cutting down their opposite numbers. Another long throw from Dorking set up a driving maul, but the defenders put themselves on the line and held the ball up in goal. A slow pass from the Dorking 9 at the scrum put his backs under pressure and the ball was stolen and probably any real likelihood of Dorking breaking their duck. Neat hands down the line and a kick turned the tables as Harry chased on and won Chobham a lineout in the Dorking half.

For perhaps the first time in the game the home backline were able to get something moving from line out ball off the top. Taking the ball on the move a perfectly timed run from Chris onto a pass from his inside man got him behind the defence at full pace and nobody was going to stop him adding a third try out wide.

With a couple of minutes remaining Dorking tried to play expansively as they went in search of a consolation try, but tired bodies and what were now pretty damp conditions conspired to limit their progress and the final whistle went for a 19-0 home win with Dorking giving the boys a real test ahead of the cup matches to come.

Meanwhile on the orchard, a momentum building 22-7 win for the Bs was achieved with tries from Andy (2), DanP and Akin plus a conversion from Dan to a converted try to Dorking. This try scored by Joe, as many of the Chobham lads did a shift for Dorking to ensure the game was played.