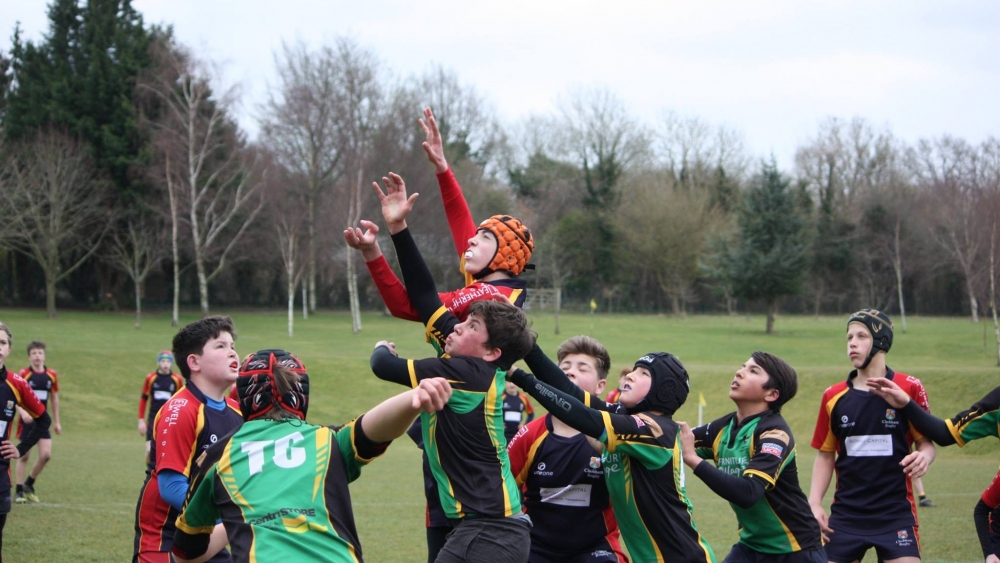 Match Report from Doug Mayger : Following on from a fine quarter-final performance at Farnham, Chobham Under 13 As faced Effingham & Leatherhead in the inaugural Waterfall Cup semi-final. Sadly the squad were missing Jack, the two try hero from the Farnham match who suffered a nasty injury in midweek. The squad wishes him a speedy recovery and no doubt most of the boys want a turn on his crutches when next at the club.

The match didn’t start well for Chobham with the opening kick spilled and E&L awarded a scrum in front of the vocal home support. The first wave of green attack was well defended and Chobham earned a scrum of their own from which a clearing kick downfield was made but in an attempt to put pressure on the home fullback the Chobham defence was called offside. A quick penalty from Effingham worked the ball left and despite desperate defence the opening score was made out wide which was well converted and an early 7-0 deficit for Chobham. The restart took Chobham into the Es half for the first time but good ball retention allowed Es to work upfield with solid tackles from Chris and Doug finally halting progress around halfway. Chobham managed to press into the opposition half once more but a turnover gave away possession. With quick pressure from the backs Harry snaffled an interception and headed for the try line. The covering tackle brought him down 5 yards short and without support a penalty to Es eased the pressure.

Effingham had obviously been watching the Six Nations as they tried a crosskick to the right hand corner which took an unfortunate bounce and apparently led to Chobham conceding another penalty and a talking to from the ref. Chobham were then undone by simple hands as a break from the fly half and close support from the backs led to the second try across on the left, this time with the conversion going wide to make the score 12-0 at the interval. Into the second half and Chobham start to make some of the attacking play with a series of picks from the ruck took play downfield. Es somehow pinched the ball back but kicked only to Chris at 15. The ball was set up and the backs realigned before George tried the crosskick which Doug raced onto but couldn’t beat the covering defence and was held up. From the resulting scrum Chobham’s best handling move saw Connor getting close on the left side. The forwards were able to hit the maul and keep the momentum going but eventually the ref called scrum for the defending side. The front row stole the put in and Al went very close from an 8 pick. Again the forwards do their best to batter over the line to no avail. Neither side could establish sufficient pressure to threaten a try as Effingham were able to play percentage rugby and Chobham were forced to chase a score. The sides matched each other in the contact area with Chobham having the edge at lineout time, but not able to turn it to significant advantage. From a ruck in midfield great counter rucking from Callum set up an attacking opportunity but the passing was getting hurried and the ball was spilled. Effingham were able to keep Chobham pinned in their own 25 as the clock counted down. There was entertainment for the Chobham supporters as the Effingham coach exhorted his team for an ‘instantaneous explosion’, whatever that might be, as he prowled around the pitch. Apparently his team were just as confused with Chobham securing a clean scrum and driving Es back into their own half.

With time almost up Chobham had a penalty which they kicked to halfway and the kick chase from Doug put his opposite number firmly into touch but the ref blew for time.

So Chobham were beaten by two tries again to mirror the league result but the boys gave it their best shot and coaches Matt and Andy could have asked nothing more.