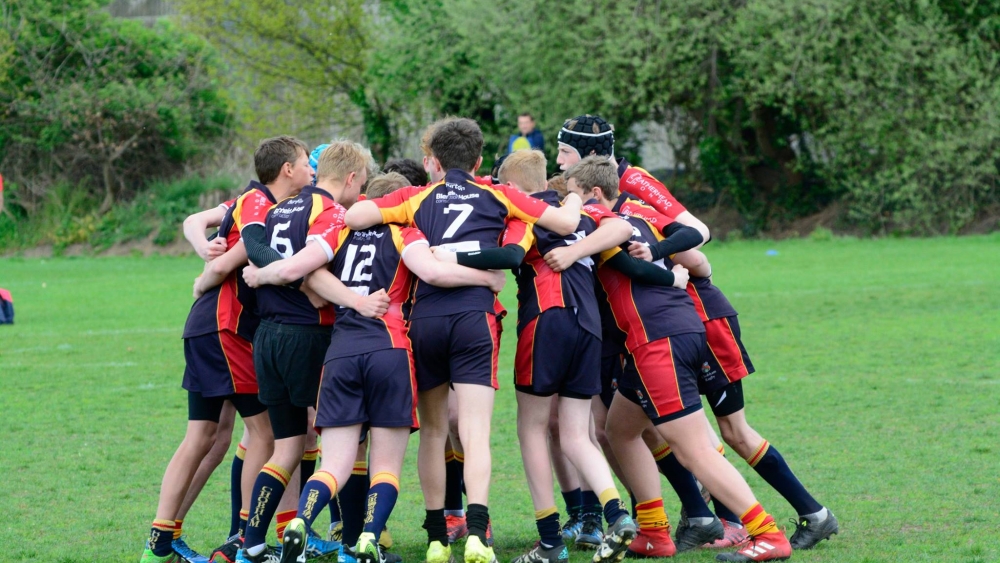 Match Report from Doug Mayger : Following a pretty lacklustre performance against Effingham & Leatherhead on Easter Sunday, the U14As travelled to Esher on St Georges Day for a 3rd/4th play-off game in the Presidents Cup. The opposition were Battersea Ironsides who would make sure Chobham would have to work extremely hard to get anything from the match.

On a bone hard track Ironsides kicked off straight up the middle. A safe catch from Charlie and quick support from his mates gave Chob the chance to lay down an early marker for the game plan. Quick rucks and tight lines run by Callum and Matt worked play into the Ironsides half which made ground and ultimately resulted in a Chob lineout in Ironsides territory. Possession was lost and Ironsides quickly worked the ball wide to one of their pacy wingers. Having been tackled they switched to giving the big lad a hit up from the breakdown but superb work at the ruck earned Chob a clearing penalty. The game became a bit of a slugfest with Chob going toe to toe with their more lauded opposition. Despite Ironsides best efforts they were repelled on several occasions and forced to concede a number of penalties. Adam almost stole an interception which might have seen him streak away, and the opposition penalty count gave a chance to drive for the line but nerves or over-eagerness meant a pass was spilled.

Ironsides then had a spell of possession which took them into the Chob 25, recycling well as Chob made tackle after tackle. A lineout in the corner was the boys undoing as an organised catch and drive led to an opening score, well converted from very wide out to put the boys 7-0 behind. Undeterred the boys were like lightning from the restart and pinched the ball, Jack streaking down the touchline and into the green and whites 25. With a couple of minutes pressure of their own, hands from a lineout, with Connor scooping a loose pass led to a forwards drive that almost crossed the whitewash, only held up at the cost of another penalty. Quick thinking and communication was rewarded with a ‘Farrell-esque’ cross kick was gathered by Adam who had the space to dive in on the right. Chris safely added the conversion and it was level again at 7-7.

Good work gain at the restart from Dan set up the ruck and Chob earned a scrum around halfway. In contrast to last week the scrum platform was pretty solid all game and a quick heel set Gideon on a break down a big blind side, but an attempted pass to Adam in space was marginally forward. A turnover in midfield and a sharp kick chase put Ironsides on the back foot but Chob conceded their first penalty to relieve the pressure. Smart work from Ironsides then gave the winger room to work down the right and he eluded a couple of tackles and showed good strength to cross in the corner again. Another good conversion, this time off the crossbar gave Ironsides a 7 point lead again.

They weren’t leading by 7 for long however, as Chob struck back immediately from bizarre beginnings. The restart chase was great again, and Adam ended up heading the ball backwards and into Jack’s hands. The backline was alert and a miss pass from Doug put Harry into the opposite corner to reduce the deficit to 2 points.

It was Fin’s turn to take the game to Ironsides with a strong carry that dragged Chob back into the attacking half as the boys went in search of a score to put them in the lead, but in a first half lasting 35 minutes Ironsides made one more telling break. Reece made a try saving tackle as Ironsides ball carrying forward zeroed in on the line. So into the second period began with Chob winning possession again as Ironsides spilled under pressure. A short burst of kicking ping pong broke out but Ironsides slowly began to gain the edge in territory and possession. Defensive duties were called on as Ironsides got close, but Al was on hand to make a vital steal at the tackle. A hurried clearance bounced in field and gave Ironsides space to return it and push the lead to two scores at 21-12.

The boys kept up their intensity driving into the Ironsides 25 but couldn’t get that all important next score. Maybe fatigue was just starting to show, with most of the boys having been in the side to beat Gravesend the previous day, but a few tackles were being missed, leading to a kick chase to the Chob line ending with the referee adjudging that the covering defence had impeded the attacker and awarded a penalty try. This was probably the decisive score and with around 5 minutes left a Garryowen into midfield dropped to the Ironsides fullback once more. A chip over was poached by the Ironsides again and their big unit was too much for the defence and he was in for a fifth try in the corner, and a 33-12 lead.

The game was up but in the final couple of minutes Chob showed a glimpse of what may have been, and something that will no doubt be a tactic to take forward to next season. A shortened line was taken and an inside pass to Oli on the hoof picking a superb line for a bullocking 50 yard break into Ironsides territory. An offload to Tommy on his shoulder looked like it could bring a third score only for the last line of defence to just squeeze him into touch 5 yards out. That was almost it, and the game ended with a final Ironsides try from another driving lineout took the final score to 38-12 which was harsh given the performance from the boys in blue. Coaches Matt and Lawrence reflected after the game that they sensed a squad with a point to prove after last week, and whilst the result didn’t perhaps show it, there was a huge amount of character on display from the whole squad who had played as well as at any time this season.