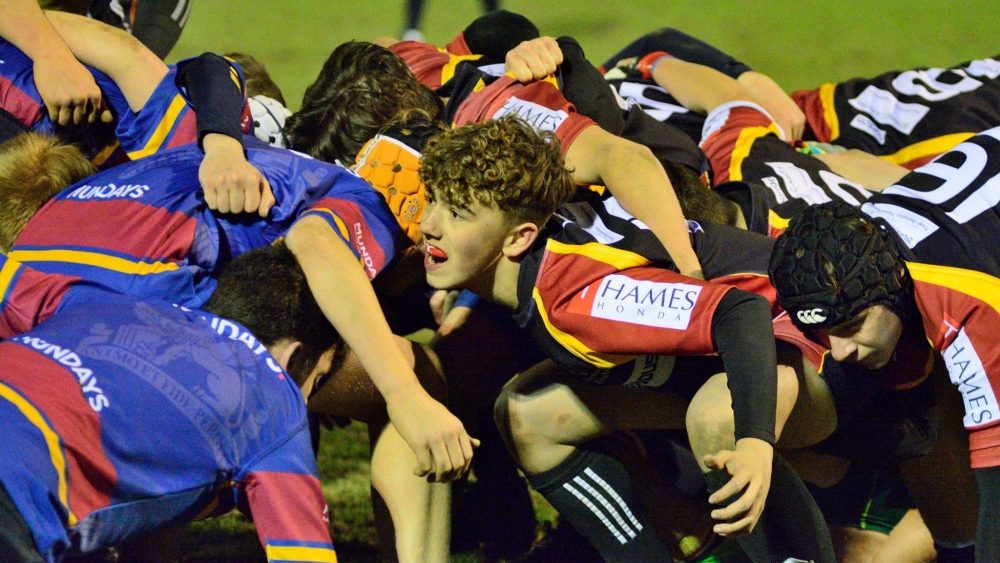 For the third season in succession Chobham U15 As were in the Surrey Waterfall Cup semi-finals. This year the game would be played under lights on a freezing night over at Cobham with Chobham giving a well-earned debut to Billy in the front row.

With a big crowd supporting both sides, Chobham kicked off and were immediately into the game as Connor was able to recover the kick and set up the first attack. From a defensive scrum Cobham tried to march up field from a deep position but were blown at a breakdown for Chobham to kick into the corner. A loose first lineout was lost and Cobham were quick to set up a counter attack breaking through and into the Chob’ half before Harry made a superb defensive tackle on a marauding giant twice his size. This lifted the home side a gear or two and the boys were on the back foot as the tackle count started to rise in their own half. Good ball retention from Cobham took them into the visitors 25 where they earned a penalty which was turned into a lineout 5 yards out. A safe catch became an effective drive and the home side were in front 5-0. Both sides were putting everything into the game and unsurprisingly perhaps the penalties were swapped as play became a midfield scrap with no clear opportunities. With around 5 minutes to the break Chob had a lineout on halfway and a testing kick under the lights put the home full-back under pressure. A tricky bounce went away from him and Tommy was on hand to pounce before the 15 left a stray leg out and was carded for a trip.

A quick penalty through the backs carried play closer still to the Cobham line and earned another penalty. This time it was Oli baring his teeth and charging at the defence. When he was finally brought down the forwards were all on hand to clear out and Charlie was through to level the scores at 5-5. Cobham raised the effort once more just before the half and pushed Chob back with a series of driving runs. They were held in front of the sticks but managed to recycle and went over in the wide left corner to restore a 5 point lead at the break.

Into the second period and Cobham were first to exert pressure winning the ball back in the Chob’ half. The ball was manoeuvred left and right, probing for a gap as the blue wall held firm. After more than two minutes play without the ref having to blow the defence creaked and cracked and a driving maul crossed the whitewash. A good conversion opened the lead to 17-5 and Chob had to dig deep if they were to get anything from the evening. In similar fashion to the first half blows were traded by each side. Cobham looked the more threatening with a well-drilled set of backs, while Chobham were able to make good ground by keeping it tight and working the drive close in to the breakdown.

Chob reduced the deficit in just that style as they pushed Cobham right back to their own posts. With the penalty advantage the ball went left and after a couple of passes Tommy was able to cut back inside the crabbing defence to score the second try. Chris added the conversion and it was a 5 point game once more. Chob seemed to smell blood and they were immediately on the front foot again. George saw a half gap and was behind the defence down the left. A well timed pass to Adam bursting through on the wing and he had the gas to make the corner. It was now 17-17 with still more than ten minutes to play.

If Cobham were rattled they recovered quickly as Chob conceded a free kick and were then penalised for not 10 giving the home side a penalty. Maybe there had been too much watching the professional game as Cobham opted to go for the penalty kick, when a kick to the corner could have set up another catch-drive opportunity. The kick crept over the bar to make the score 20-17 but Chob were still in touching distance.

After the kick Chob were back in their own half as Cobham pushed for a deciding score but once again the commitment in the tackle was faultless and they were forced to go wide. They went for a looping miss pass in midfield but Gideon had seen the danger and was right there to make the interception about 15 yards from his own line. The Cobham defence had committed to the attack and there was nobody in front of him. The line came soon enough and with Adam in support running a great defensive line on his shoulder he dotted down under the posts and Chobham were in the lead for the first time as Chris again converted to make it 24-20 to Chob. Into the final five minutes and both touchlines were getting hoarse from supporting their boys. With a couple of minutes to go Chob were back in their own red zone as Cobham threw everything into the search for a winning score. The defensive shift put in across the park was immense as tackle after tackle kept the home side out and they were held up in front of the posts twice.

Into injury time and there were shades of Wales v France last season as Cobham had a series of 5 yard scrums. Twice Chob pinched one against the head but were unable to make a decisive clearance. Cobham had a penalty right in front of the posts and went for the drive over. Yet again Chob went to the well and came back with enough to keep them out. The ruck was recycled and Cobham were over the line once more, but a Chobham hand was under the point of the ball. With the ref down on his knees doing his best to make the right call he judged it held up and call full-time after 6 minutes of injury time.

For Chobham it was joy unbound, but for Cobham it was clearly gutting. Nobody who had braved the elements to watch could deny that both sides had played to the absolute limit and it had been a superb display of junior rugby. So, after almost 9 years and 17 matches from Under 7s to Under 15s, the As had finally beaten their neighbours and could now prepare for a final against Dorking or Reeds in a couple of months.