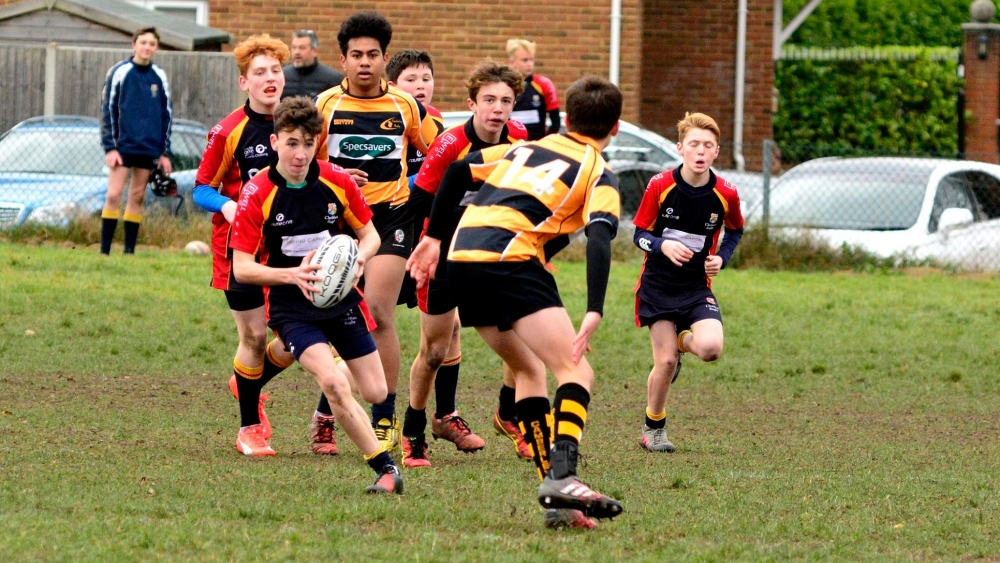 Chobham U14s hosted both Camberley A and B squads to Fowlers Wells on Sunday in a ‘friendly’ fixture following completion of the Round Robin stages. The As faced each other on the training pitch with Chobham starting the game playing up the hill.

The match started scruffily with both teams infringing at regular intervals and the game lacked any pattern. Camberley were aggressive at the breakdown and won a couple of turnovers to put Chobham under pressure down the hill. One hack through took play into the Chobham 25 and MattW had to dive to gather the ball. A solid ruck gave the opportunity to clear back upfield and Chris chased hard to snaffle the bouncing ball as the Camberley defence was scrambling. Chobham were on the front foot and worked the ball up to the Camberley 25 and a scrum put in. Another penalty at the ruck meant a kick to the corner but the lineout was deemed not straight and the opportunity was lost. Camberley couldn’t clear their lines decisively and a poor pass from the base of the scrum allowed the Chobham backs to pressure the 10 into dotting down behind his own line for a 5 yard scrum. From the scrum Reece went for it and was held up a yard short, but illegally and Chobham had a penalty in front of the sticks. A tap for the forwards drew another penalty and this time the ball went wide left but Connor was held up just short and Camberley cleared to halfway.

Having soaked up the Chobham attack for several minutes it was Camberley’s turn to go for the opening score. From a missed touch kick in the Chob’ half Camberley spun the ball right and looked to be in at the corner before the home cover got across and smothered the attack. From the ensuing lineout Camberley pressed again through several phases but again the defence was up to the task as both sides looked to have had a few sessions with Paul Gustard at Pennyhill Park. Camberley continued to hold the edge on territory and possession but couldn’t create any gilt edged chances and the final activity of the half was Chobham breaking clear as the forwards and backs combined to take the game back towards the top of the hill. Again the defence snuffed out any real chance and the half-time score was a tense 0-0.

With the advantage of the slope Chobham fancied their chances as they opted to attack Camberley close to the breakdown with Oli giving the forwards a focal point to work behind. The more physical approach had Camberley rattled but they met fire with fire and the black and orange wall held firm. It was Camberley who opened the scoring after they put together a series of phases up the hill and Chobham’s defence for once failed to match the offensive intensity, and Chobham were 5-0 behind with the score made in the corner.

Chobham went back to their tighter game plan and a series of drives from Fin, Oli, Callum and MattW brought them into the Camberley 25 once more. A penalty was conceded but a missed touch kick kept the pressure deep in Camberley territory.

A second missed clearance kick was gathered by Jack who set off on a trademark arcing run downfield. Good support from the backs got to the 5 yard line, where a quick ruck kept the move alive. The opposition had been sucked in and simple hands were enough for Jack to finish the score off back on the left hand side to level things at 5-5.

Any thoughts that Chobham might be able to finish off the game were quickly dispelled as Camberley redoubled their efforts up the hill. The quality of both attacking and defensive play was excellent with Camberley again going through a number of phases but Chobham kept them out as play moved from left to right and back again before Chobham drew a penalty and were able to get back downfield. With room now to manoeuvre the Chob’ three quarters sensed there were chances out wide. A break from Doug pushed Camberley back and eventually Chobham had a scrum in midfield. The scrum, which had creaked a bit during the game, was able to set the platform for a final attack. Aran, having just come on after playing a whole game already, timed his pass to perfection for Chris to cut in and go for glory. Defence proved too strong one final time as the ball was spilled at the ruck. The referee called full-time with the score remaining 5-5 which was a fair reflection on a game with both sides giving everything in this local derby.