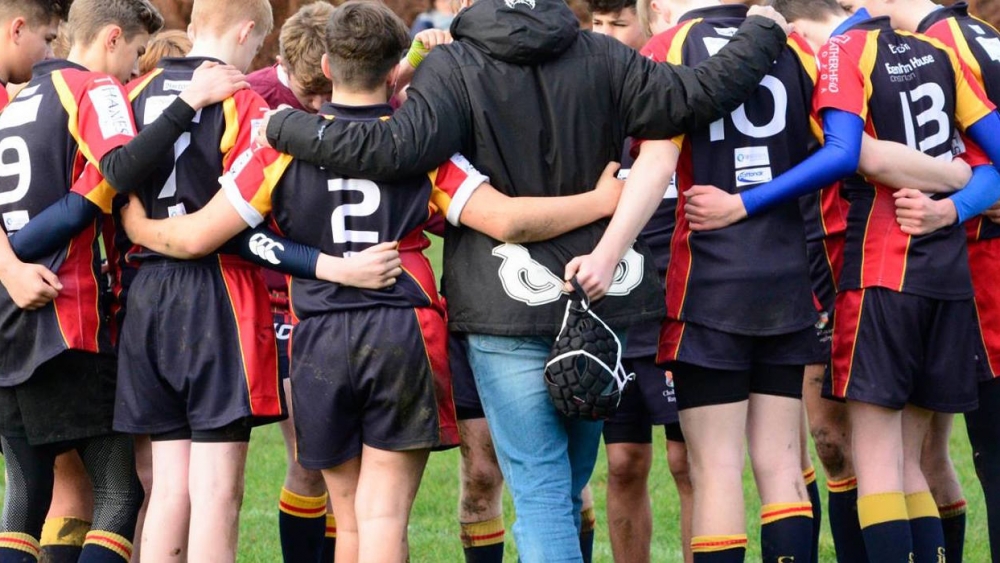 Chobham U15 As travelled to Horsham on Sunday for a friendly fixture against one of the strongest sides in neighbouring Sussex. With use of the first team pitch it seemed likely to be a high scoring game with plenty of room to play.

Chobham started with the sun behind, but right from the whistle were under the cosh from an aggressive home side. By virtue of straight running and strong support lines Horsham were 2 tries up within the first 5 minutes and Chob’ were staring at a heavy defeat if they didn’t react soon.

The visitors continued to be far too passive in defence and a third try came from a lineout in the Horsham half. The Chob line stood off the line out and Horsham got a good drive going that carried them 30 yards down field. The backs then took control and again made use of the wide pitch to get around the defence on the far side to take a 17-0 lead after only 10 minutes.

This finally seemed to spark the boys in blue into action and they began to compete at the tackle and managed to make a few inroads into the Horsham half without actually threatening the line. Horsham continued to look the more incisive when they did have the ball and before half-time had crossed over for another pair of tries and a huge lead of 29-0.

Finally, in injury time at the end of the half, Chobham had an opportunity to open their account. The ball was lost close to the home line, but a missed kick was gathered by Chris. He saw enough of a gap in the covering line and was able to sprint through and get a score right on the whistle. At half-time the score was still 29-5 but the boys had got something from the half.

Into the second half and it was a totally different performance from Chob’. They were much more clinical and aggressive at the breakdown and were able to put together some purposeful passages of play. Horsham, in contrast, were now on the back foot and were drawn into conceding penalty after penalty for infringements at the ruck or holding on in the tackle.

A reshuffled backline with a few boys filling in out of their normal positions stifled any breaks at the first opportunity so Horsham were forced to kick a lot of possession. The back three of Aran, Rhys, Adam and Harry (as the line shuffled around) were safe under the high kick. Good line kicking ensured that Chobham were able to consolidate their possession into good territorial positions and the score began to look more respectable.

The benefits of Wednesday night training started to show as the forwards adopted a fast rucking game with lots of ‘pick and go’ options. This resulted in the second try as Harvey went over the first try of the half wide on the right.

Chobham were soon attacking again as the Horsham penalty count rose, and a few minutes later MattN ran a great line one out from the ruck to cut through and score behind the sticks. Suddenly the lead was down to 29-17 and Chobham were rolling.

With around 5 minutes left another set of quick rucks committed the Horsham pack and Dan was able to dive over for a fourth try. The gap was now only 7 points.

Chobham’s confidence in the second half meant they were soon into Horsham territory once more. After a couple of scrums the ball was released to the backs and Chris opted for the kick through to right under the posts. As the cover came across, he was brought down without the ball and the ref called a penalty. Taking the tap quickly with the defence still scrambling made a gap for Aran to score the fifth Chobham try, but with the wind swirling it was too wide out for what would have been the tying conversion. Full-time was called without the game restarting and Chobham had certainly gained some respect following a lacklustre first half, and should remember this second half display when the Surrey cup matches restart again in a few weeks.