Last Thursday evening Chobham hosted Belgrano Athletic Club U18s from Argentina. This is the former club of Fed so it was only fitting that Teo, his son, wore the captain’s armband for the fixture. 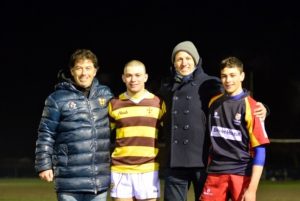 Belgrano looked well drilled and competent in the warm-up so the home lads would have to be at their best to keep themselves in the game. Belgrano played uphill in the first half and Chob were obviously taking things seriously, driving into the visitor’s half before conceding a scrum around the 25. Belgrano kicked for territory with a good chase and won the ball back only to concede a scrum themselves.

The opening spell demonstrated that Belgrano train regularly as a team and had a number of attacking options up front and in the backs. Chob however were able to resist these attacks with Fin winning a turnover in the tackle to allow Chob to kick back into the Belgrano half. The visitors were able to keep Chob out of their 25 however and worked their way back up field, eventually earning a scrum in the Chob red zone. Belgrano won the scrum, despite pressure from the Chobham pack and executed a neat miss and loop move in midfield. This first attack was held up in typical Chobham fashion but the visiting forwards had enough momentum from the attack to squirm over and with the conversion took a 7-0 lead after 20 minutes.

The restart was kind to Belgrano as they allowed the kick to bounce but it sat nicely as Chobham attacked. A kick back into midfield was returned but Chob were pinged for not retreating. Another penalty quickly had Chobham defending a lineout deep in their own 25 once more. This time it was the visiting pack who kept the ball through several phases as Chob defended around the breakdown. The whitewash was breached in the end almost under the posts and it was a 14-0 lead.

Belgrano continued to have the possession and territory advantage but the blue line held firm and forced a couple of turnovers and penalties to keep the half-time score to 14-0. 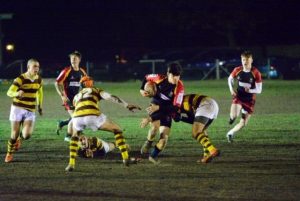 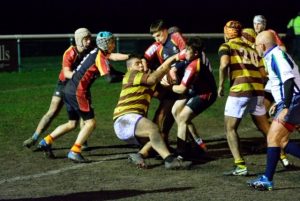 Chob now had to work up the slope, but a kick-off into space put Belgrano under pressure and a charge down from Ronan pinned them back near their own line. They couldn’t exit their exit strategy and Chob opted for an attacking scrum at a penalty on the right hand side. With a solid platform Cooper made a break from 8 and Ewen was on his shoulder for a neat offload and darted through a gap to peg the score back to 14-5. 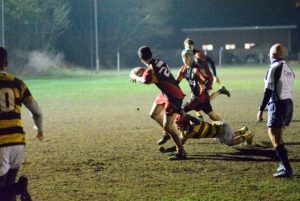 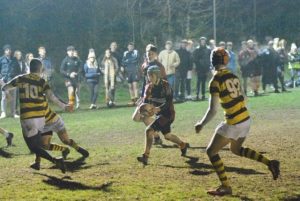 Belgrano hit back and it was Chobham who were stuck in their 25 for a spell. The defending in the second half matched that of the first and when Belgrano finally had an opening they were brought down just short and penalised for a double movement. Chobham cleared and had a lineout 25 yards out.

This has been area where work is needed and Belgrano pinched this one. Unfortunately, it came to easily the biggest guy on the park who crashed down to within 5 yards of glory. His team mates are obviously used to this and were right behind him to recycle and restore the 14-point advantage.

Both sides continued to play some good rugby, entertaining the home crowd who had turned out on a chilly night, but the defences had the upper hand. To enable all the lads to get plenty of game time some new positions were tried and Jack popped up in the centres to good effect, making ground for the team to pour in behind. For the home side Lewis went off injured during this period with what was later confirmed as a broken arm.

A Belgrano attack down the right hand touchline brought a loud ‘ooh’ from the crowd as George cut his opposite man in half at the tackle and earned a penalty in the process. 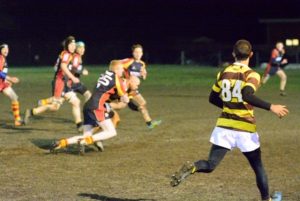 The home side couldn’t capitalise on the penalty and a couple of free kicks taken quickly had Belgrano back in the danger zone once more. From a 5 yard scrum they had enough room to squeeze over by the corner flag to extend the lead to 24-5.

With time almost up Chob forced a scrum at the restart in good position. Again the pack did their job and Aran sprinted through a gap on the short side to double the home try count and make the final score 10-24 to the visitors.

A game played in great spirit with both squads mixing up on the whistle for the post-match photographs and mixing in the bar where the Chobham’s grasp of Spanish was soundly put to bed by Belgrano’s English. 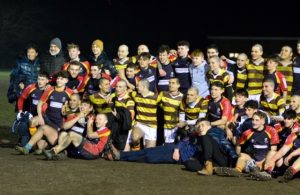