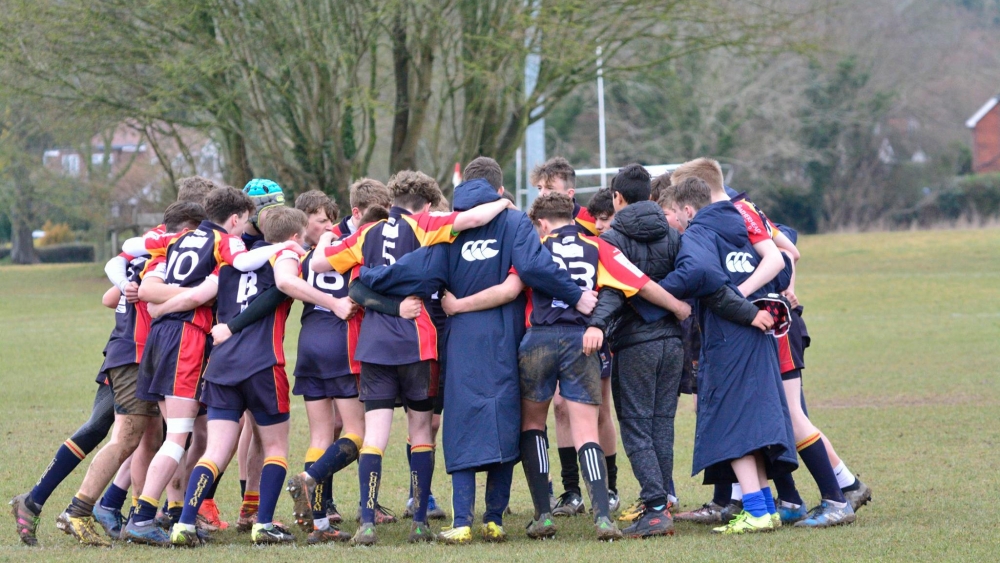 It was another game, another cup competition for Chobham U15As as they made the trip to The Big Field in Dorking for a Harlequins Cup round robin match on Sunday. Having hosted Dorking for a combined A/B fixture earlier in the season all involved that it would be a tight game with both sides showing a strong defensive ability.

Dorking were too keen at the kick-off and in front of the kicker so the first action was a scrum on the centre spot. Setting the tone for the match as a whole the Chobham pack had the upper hand at the scrum and were able to release the backs in good field position. A high tackle penalty led to a kick to well inside the Dorking 25. Clean possession once more gave the backs an opportunity to push for an early score but the chip kick was gathered by Dorking and it was back for 25 yard drop out. The game ebbed and flowed as both sides showed a desire to use the ball in the wide channels but as maybe to be expected the defences stood firm, with Al and Callum putting in some ferocious hits around the breakdown. Chobham were able to pin Dorking back without threatening, the nearest coming from a charged down clearance that just managed to bounce away from blue hands.

It seemed that half-time would be reached without the scorer being involved, but from Dorking pressure and a series of quick rucks a gap appeared close to the posts and the Dorking scrum-half squeezed over. A simple conversion made it 7-0 at the break. In the opening minutes of the second half Chobham revisited a tactic that had served them well in recent games, playing a tighter game, with quick picks from the ruck to work themselves into better positions before the backs were given the chance to work a gap in the scrambling defence. This brought a number of penalties as Dorking were on the back foot. The scrum continued its good work, with the ref starting to lose patience with the put in.

Midway through the half a Dorking clearance missed touch and was gathered by Aran on the left wing. With Jack looping round in support he was put into space and made it to within 15 yards of the line. Aran had continued a supporting line and when Jack was held he was on hand to receive the offload and have the pace to cross the whitewash for Chob’s opening score. The kick was out wide and Dorking now held a narrow two point advantage. Dorking were able to keep Chob in their own red zone, having a couple of chances to attack from the scrum but with the rain falling and aggressive pressure on the line they weren’t able to break through and were eventually driven back to halfway and conceded another scrum under pressure. Chris made a clean break and was in open space before the fullback made the covering tackle, but the defence were blown again at the ruck and Chris made good with the penalty kick to edge Chobham in front at 8-7 with just over 5 minutes left.

With Dorking having to kick back possession to Chobham it would be nip and tuck to see if the visitors could see off the clock. A kick back to the Dorking full-back was returned with interest as he was able to gather his own garry owen and Chobham were themselves penalised at the tackle. Dorking pushed the penalty deep into the Chob 25 for a line out, and possibly a final chance to win the game. A clean take gave them the platform to drive at the line, but the defence held firm once again. At the expense of drawing in the defenders and Dorking were able to spin the ball wide to the left where the winger was able to dive in right by the flag to the delight of the home fans. Their lead was 12-8. Throughout the match, the ref had been taking time out to talk to both sides, particularly at the scrum, to it was now just a matter of how much injury time he would add. Chobham were able to win a penalty in midfield, and Tommy took a quick tap and was off, trying to get Chob into range. Dorking infringed again and this time it was Connor on the hoof looking to get Harry in space. Closer Chob got as they went back to driving from the ruck. With injury time reaching 5 minutes a driving maul within sniffing distance of the line. The red wall held firm and Chob were held up a couple of feet short, giving Dorking a scrum. The ref called ‘last play’ and surely it was all over.

Finally the ref’s patience snapped however as the Dorking hooker was clearly waving his foot in the tunnel and he blew for a free kick before the 9 had even got the ball in. In a flash Gideon had his hands on the ball. Before anyone could react he had launched a big cross field kick to the right hand side. As players and spectators glanced across, there was Harry closing in, literally with the game in his hands. In truth he never looked like dropping it and gathered safely to clinch the latest of late victories.

The final score was 15-12 for the visitors and this squad had yet again shown that when it really matters they are finding a way to get the win and continue their unbeaten cup form this season.