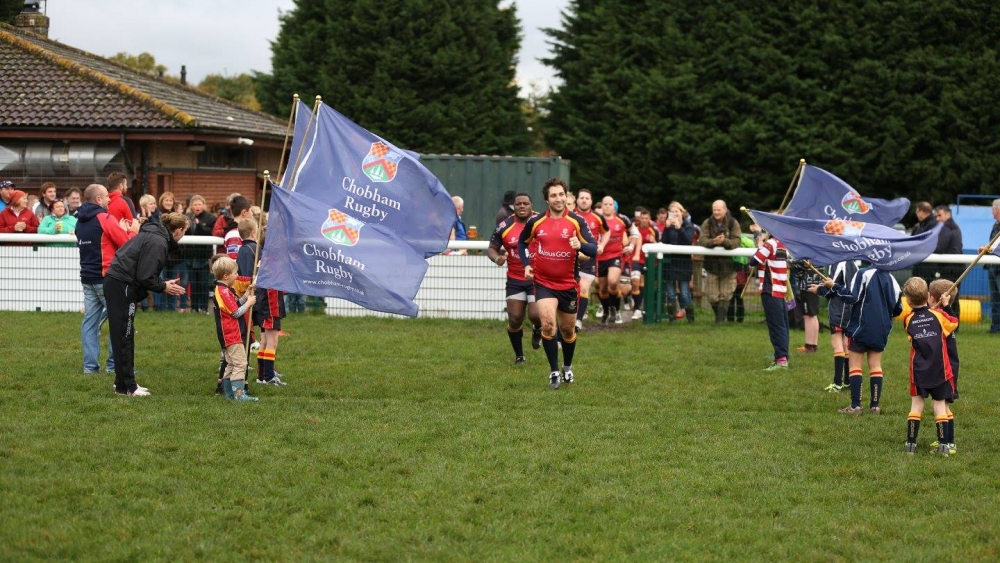 Match Report from David Page, Director of Rugby : Chobham 17 (5) v Guildford 24 (17)
Chobham entertained league leaders Guildford in the battle for local bragging rights. From the off, Altius GOC Chobham were caught cold and frozen when they found themselves 10 points to nil down after only 5 minutes, a penalty, try and conversion the root of the damage.
Matters then began to Improve and Chobham began to adjust and actually take more control. They had opportunities and a penalty on 20 Minutes by fly half Alec Thomson went just wide. The game was full of attacking flair as both sides began to try and assert. Chobham after recent weeks looked much more like their old self. On 29 minutes Guildford extended their lead following some lose play by Chobham. Turnover ball being key and Guildford did not need to asked twice to take advantage. The converted try extending their lead to 17 points to nil.
Chobham needed a big response and within minutes they showed the class and flair the home faithful were so used to. From a line out in the Guildford 22, they took possession and a serious of drives by the forwards saw prop Lee Evans go over for a well-deserved try, the conversion was missed, the score went to Chobham 5 – Guildford 17, and that remained so until half time.
Chobham needed to build on the impetus of their try and within minutes of the restart a move that began out wide left, saw a dozen phases before coming back to the right, a long sweeping pass went out to Jayde Cruickshank saw the big powerful centre go over for try to narrow the gap to 7 points as the conversion again went wide (10-17).
Chobham again had chances to claw back but further penalty kicks by Thomson failed to find the right area. Chobham were now in the ascendancy and on 53 minutes Fit again Josh Devitt showed his superb skills as he made a break just outside the Guildford 22 and sauntered past four ensuing defenders to score, the conversion by Thomson this time went through the posts – (17-17)
Chobham’s injury woes then mounted once again done, fly half Alec Thomson went down in agony with what has turned out to be a fracture to his arm.

It was now all even and Chobham were very much like the team of recent times and pounded at Guildford time and time again but the league leaders defended stoutly. A draw right now would have been a fair result, but life is cruel and with the final play of the game, a line out from a penalty infringement by Chobham gave Guildford a final opportunity to take the points, from the line out they formed a driving maul, with all 15 Guildford players pushing the outcome was inevitable and they score with the clock now passed the end of play, with the conversion they took the bragging rights 24 points to 17. A game we could have won, a draw would have been a fair result, but lady luck is not with Chobham right now, with the pre match loss to injury of player coach Ryan Gregory, the season has been littered with a mass of injuries, the tide has to turn soon– Please.
Next week Chobham travel to Charlton Park who showed what they can offer with an away win at Havant on Saturday.