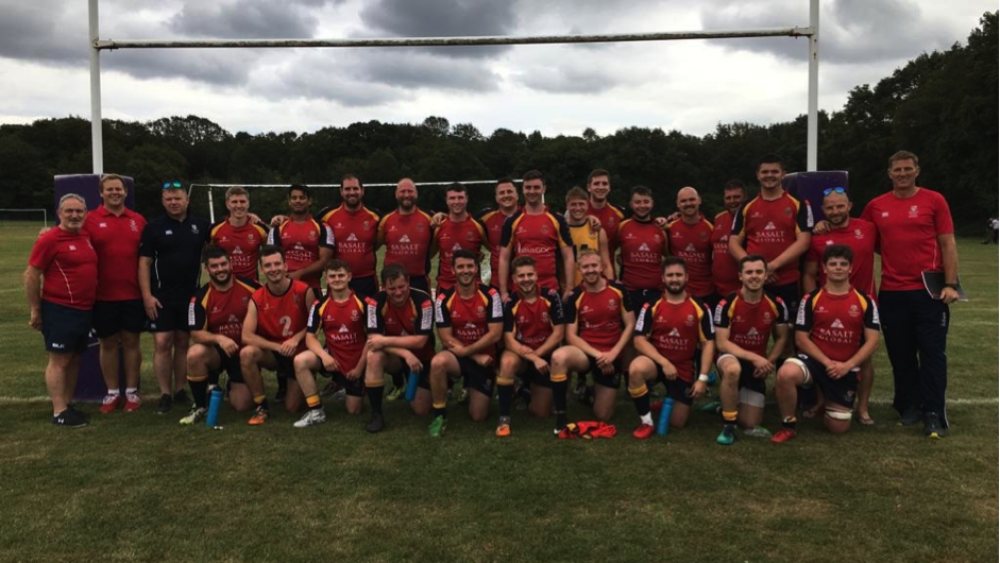 by MIke Vandenberg
with no comment
Chobham NewsSenior Match Reports

Chobham’s first preseason game of the 2019/20 season took them up the A3 to play a very experienced London Cornish team, Cornish were playing their third and final preseason game before they kick off their season in London 1 South next Saturday.

A number of senior players were unavailable due to a wedding (congratulations Scampi and Belle) so it was a small Chobham squad, which included a number of new players and those making their debut that took to the field.  I’m pleased to say that the 23 players certainly didn’t disappoint the Chobham faithful who travelled to London Cornish to watch #MightyChobham.

The respective Head Coaches agreed that the format for the game and that there would be four twenty-minute quarters.

Cornish were quick out of the blocks when they scored and converted to make it 7-0 within the first three minutes. Although Chobham found themselves a try and conversion down very early in the game they dug in and defended well against a very big forward line. Chobham’s backs worked well to set up a try for player coach Joe Reid who scored his first try for Chobham on his debut, the try wasn’t converted so it was still 7-5 to Cornish. Cornish were next to score and convert the try making it 14-5.

The score remained at 14-5 to Cornish for the next 15 minutes as both teams defended their lines well however Chobham were next on the scoreboard when Pete McCain barrelled over to score another try for the forwards.

Unfortunately, the try wasn’t converted so the half ended with Cornish just in front at 14-10.

New Head Coach Billy Davison made several changes at the half and Cornish were the first to score in the next quarter, converting the try to make it 21-10. Although Chobham defended well the stronger Cornish side scored two further try’s and kicked the conversions to make the score 35-10.

Further changes were made by both coaches at this point and Chobham hit back when the forwards managed to turn the ball over from a Cornish scrum inside their 22 yard line, two strong runs from the Chobham forwards enabled Adam Peever to find himself on the five yard line with ball in hand, Adam threw a dummy pass which fixed the Cornish backs and enabled him to beat two defenders to score his first try on his debut for the 1st XV to make it 35-15 to Cornish.

The third quarter ended with another try and conversion for Cornish to make it 42-15. The final quarter was interrupted when the game was held up for five minutes due to an injury to the London Cornish scrum half who suffered a cut to his head. Cornish ended their scoring for the day with a well worked try to score in the corner and convert the try to make it 47-15.

With only minutes remaining in the final quarter Chobham continued to pressure Cornish which resulted in Conner Stuart breaking through the Cornish’s defence to make a twenty metre run, the ball was lost forward in the tackle so Cornish were awarded the scrum, Chobham’s scrum once managed to dominate the big Cornish pack and the referee award a penalty to Chobham, Robbie Kennard took advantage of this by tapping and taking off which after some good inter play between the Chobham backs resulted in Tommy Reed touching down in the corner to make it 47-20. The conversion was missed so the final score was London Cornish 47 Chobham 20.

Billy Davison was very pleased with how his 23-man squad played “I’m very proud of the Chobham Rugby guys today – so much to celebrate. First outing against a higher-level opposition and what a response, only 4 points in it at the half, four brilliant tries and endeavour in abundance. Reasons to be cheerful? Many. My player of the day, very well-done to Ben Puttock”.

Captain Robbie Kennard “A pleasing start to the season and a good runout for the squad. Lots of positives and plenty to work on. Chobham managed to start putting in place our patterns of play which is encouraging but we would like to get out the back and play a little more; that will come with understanding and time!
Well done to the whole squad and in particular the debutants”.

Assistant Coach Ben Goldie “Very encouraging preseason match for the Chobham players, where a solid scrum and some great play in attack produced four tries against strong opposition! Looking forward to next week to build further, before the first league game of the season.”

Next Saturday will be a very busy day at Fowlers Wells, the days festivities kick off at 11am when the Surrey Chargers host a Mixed Ability Festival. The Chobham Girls section will also be out in force as they plan to play an exhibition game to promote Chobham and hopefully recruit more girls into their growing section.