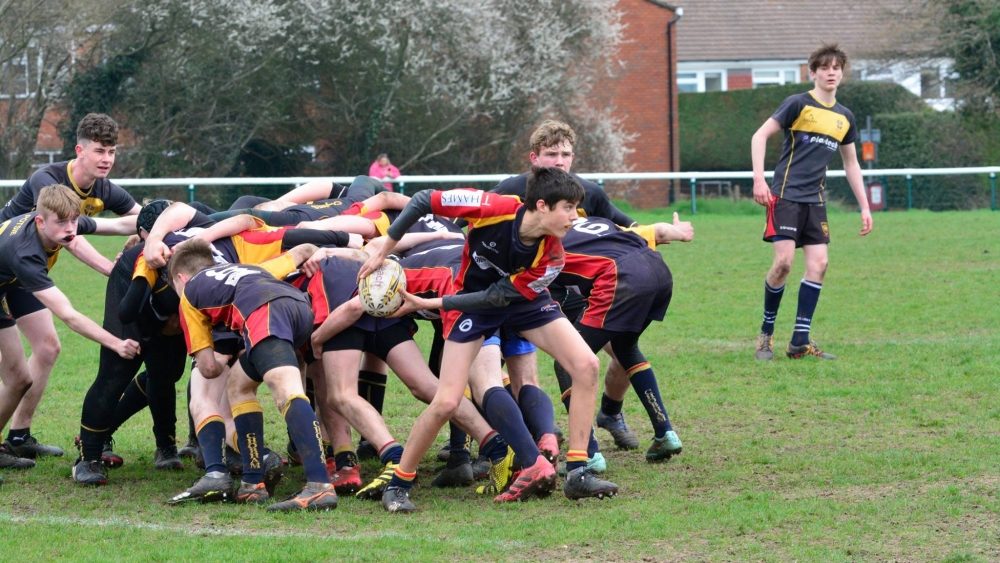 by Chobham
with no comment
Chobham NewsJunior RugbyMinis Match Reports

The Under 15 Bs and As hosted Esher and London Irish As respectively on Sunday, following a tour to Dublin where all the boys showed great application in narrow defeats to Suttonians U16 squad.

First up were the Bs who yet again were up against an A squad containing some big units who were keen to carry the ball at the Chobham defence.

The early exchanges were a little scrappy as both sides struggled to hold the ball in contact and create a platform to attack from. Esher then had the first opportunity as the home side were penalised at the ruck and Esher kicked to the corner. A neat front peel was held, but illegally so Esher opted for another line in the corner. This time the catch and drive option, with maybe a hint of ‘truck and trailer’ was held on the line, but a pick and go found a gap to go over by the corner flag and opening the scoring for the visitors at 0-5. The restart dropped to Esher’s main ball carrier with space to build up steam. With support on his shoulder the visitors were immediately into the Chob red zone before spilling, but a high tackle was adjudged and Esher had the penalty and a line on the home 25.

Good pressure in midfield caused a handling error and Teo poached it with Andy making ground and then Akin making it to the Esher 5 where Chob won a penalty. Opting for the quick tap a couple of surges ended with Chob being held up a fraction short and Esher had a scrum to release the pressure.

Esher worked their way upfield until a combination of attacking close to the breakdown before releasing the centre into a backtracking defensive line brought their second try and a 10-0 lead. It was 17-0 very soon afterwards as the restart didn’t go 10 and a scrum provided the platform for the visiting left wing to round the defence and give an easy conversion.

With some stern words from the coaches the boys reacted in fine style, by taking the game to their opposition and showing they too could carry hard in traffic. The breakthrough came as SamO cut right against the drifting defence putting Rhys into space in the tramlines. He was held but Saxon was looping at pace and had the gas to go over and make the half-time score 5-17. Early in the second half Chob kept up the pressure as early tackles stopped Esher from making ground. An attacking scrum and the wings combining down the short side got Lewis close the line. Harvey was on hand to pick up and blast through the defence wide in the corner, in similar fashion to the game in Ireland the previous week.

The lead was down to 7 points now and Chob went in search of a third score. Unfortunately a loose pass in midfield was hacked on by Esher and Chob were backtracking at pace and conceded a penalty near their line. A quick tap allowed Esher to go over and extend the lead to 24-10. The lead meant Chob had to play a higher risk game and Esher were able to pounce and create another attack of their own. A penalty lead to another attacking line and this time the front peel was enough for Esher to score their fifth try and the lead was 29-10.

Unbowed, Chob did their best to cross again, leading to the occasional ‘squabble’ but the Esher defence held firm. With the final play of the game Teo tried a quick tap, with Esher being caught not 10. Another tap went to Harrison but he was held just short and the final score remained 29-10.

Big thanks go to the boys who took turns to help Esher to play with a full 15 rather than playing one short.

Next up the A squad took on London Irish, a side they hadn’t played since the days of mini rugby. With the game being a ‘friendly‘, some of the boys from the Bs match bolstered the bench and looked to show the strength in depth through the age group.

With Chob kicking off it was the defensive side of the game that was on show first. Irish were pinned back in their half as the tackles found their mark. Irish in turn showed good ball retention before conceding a scrum just in their own half. With the roles reversed the game was remarkably familiar as Irish in turn defended well as Chob probed for a gap before finally being penalised at a ruck. An Irish crosskick was kept in by Harry as he scooped it underarm in field just as he was about to step into touch. Chob now had the territorial advantage but couldn’t manufacture a clean break as a half break from Fin in midfield and then MattN were brought down by the boys in green. Penalties were exchanged as Chob kept Irish in their own half for the most part until almost half-time. Chris made a break from fly-half, his shirt stretching to a pale blue as his opposite number just had enough to keep hold. Ruck ball was kicked to the corner from where Irish punted it back into midfield. Gideon was prowling and saw plenty of space to the left. A wide pass to Tommy was enough to open the scoring, Chris adding the extras for a 7-0 lead just before half-time.

Maybe Chob switched off slightly as Irish piled forward to win a penalty and kick to the corner. With lineouts being uncontested it gives plenty of scope to set up a drive which Irish duly did to good effect, winning a penalty. The drive this time was successful and Irish levelled at 7-7 on the whistle. Starting the second half with a deep kick Chob were immediately on the back foot in the left corner. A series of drives from the visiting forwards were repelled before they were held up over the line and had a 5 yard scrum. Chob were penalised for wheeling and Irish went for the lineout once more. Another well-drilled routine was enough for them to take the lead for the first time at 12-7.

Irish were a bit haphazard under the restart and allowed the ball to bounce before gathering under pressure and then conceding a scrum from a forward pass. This time it was the Chob set piece that was in control as they got a nudge on putting the defence on their heels. Gideon gathered and with a quick shimmy was home free to score out wide as the full-back tried to get across to him. It was back to level at 12-12. Chob kept up the pressure and looked the most likely to break the deadlock, first from a lineout drive of their own and then using a couple of clever kicks to  turn the Irish wingers, Adam being inches away from gathering the bouncing ball with the line at his mercy.

Irish were able to keep Chob out however and with around 5 minutes to go won a penalty and cleared to halfway. Looking to use the backs Fin and Tommy were up quickly and created the turnover. Fast hands left where the Irish backs had come in tight at the ruck meant Connor was able to use his pace and loop round to retake the lead at 17-12. With a slender 5 point lead any Irish score could have given them an opportunity to snatch the victory at the death. Digging deep they were able to put Chob back in their 25 following a penalty as the ref called last play. The drive was held 5 yards out and Irish looked to work across field through the hands. The home side once more were stronger in the wider channels and Irish spilled the ball before it was hacked into touch to confirm the narrow 5 point victory to Chobham.

Both games proved to be excellent work outs before their Surry Cup matches at Weybridge Vandals on 22ndApril, the Bs having another fixture against an A squad in the Chairman’s Cup at 11:30, this time from Guildford before the As take on Dorking in the Presidents Cup final at 2:30.