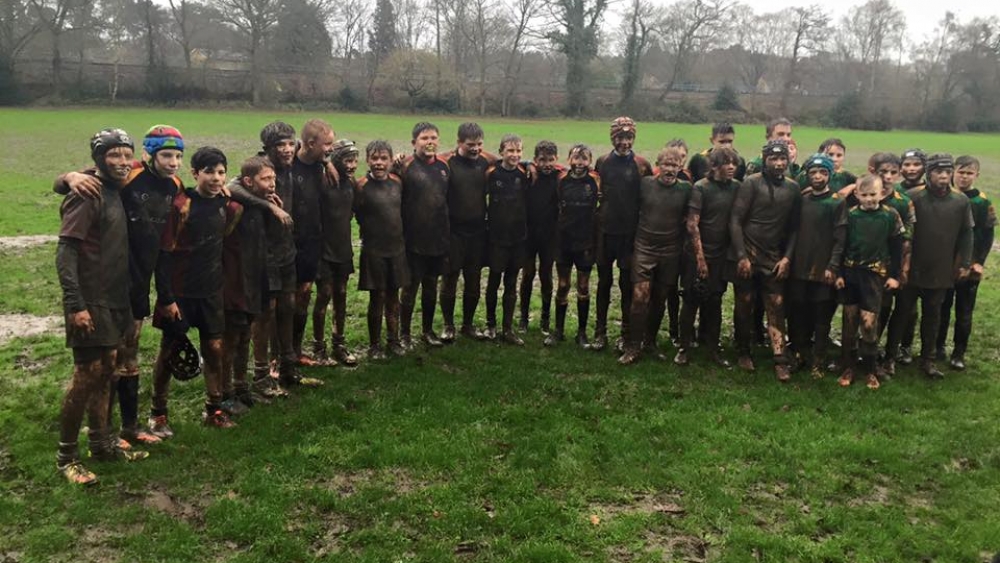 Match Report from Doug Mayger : Chobham Under 13s began 2016 with a double header friendly against Bracknell in a rerun of the opening fixture of the season. With healthy squad numbers especially given the conditions and the proximity to New Year, the B squad were able to loan a number of players to Bracknell to ensure the two games could take place simultaneously. In the As match both teams had trouble with the kick-offs in the heavy conditions with grubber kicks being de rigeur, but gathering these was still tricky as Chobham won a first scrum right at the start of the game. The Bracknell front row were up and running first with one against the head, but the break was cancelled out by strong defending and for the first few minutes the game was a midfield battle in the mud.

Last time these two sides met it was 0-0 but that score line only lasted around 10 minutes as Chobham scored at the end of a series of rucks and mauls that pushed Bracknell backwards. Oli was on hand to finish off the sequence and ground the ball over the line for a 5-0 lead following a sensible decision to ignore conversion attempts. From the restart Dougie fly hacked the sliding ball down field and set off after it down the right wing. With able support from the outside backs Bracknell were forced to concede a lineout 25 yards out. Conditions didn’t help and Bracknell poached the ball and had a spell of possession to win good field position in the Chobham half.

Chobham defended well and despite Bracknell using the driving maul to good effect, the ball was spilled when the Chobham back line were up quickly to pressurise the Bracknell attack. Chobham stuck to a simple game plan for the remainder of the half putting boot to ball and forcing the home side to play back at them after the fullback did well to gather the majority of the clearances without knocking on. Bracknell had a couple of strong runners but the Chobham defence was able to marshal him pretty successfully and limit his gains.

Bracknell kept the pressure on and a dart for the line was held up only by giving away a penalty. The ball was moved wide to make use of space but again the defensive line was up quickly and forced the Bracknell team backwards. The half ended with Chobham on the attack after another long kick and a steal at the tackle but without any addition to the score.

The second half began with the obligatory grubber which was gathered safely and good interplay amongst the front three put Chobham on the front foot immediately. After advancing well into the Bracknell half a cross kick was caught by Chris who set off for the line, but a combination of the conditions and the one opponent who had the speed to catch him meant that the attack was halted 10 yards short. Chobham seemed to be handling the conditions the better now and a series of short drives and good clearing out took play close to the try line. Good communication from Max on the blindside led to the second score as DanM fed him from the base of the ruck and a simple draw and pass put Connor in on the overlap to make it 10-0.

Bracknell tried to come back but were corralled very well and the strike runner closed down by the back row. The third try came from a turnover from such a move as Hugh was first to react to a pass spilled under pressure to feed Gideon who had the legs to break from the Chobham 10 yard line around the defence to score under the posts.

This time Bracknell were able to put together a spell of pressure and get a consolation try after the Chobham line was eventually breached from close in after a number of drives were held up.

It was Chobham who finished the match with the final score after a typical charge from Oli who kept the ball available and Connor picked up the offload at pace to go over for a second try to make the final score 20-5. In the other match it was a similar story to the early season encounter as Chobham scored a number of tries that ref Rob couldn’t count with Bracknell restricted to only two or three. A great attitude across the park carried the team home, with players stepping up to play both out of position and for the opposition so that a game could be managed, including Aaron who split his time between the two matches and Joe taking a spell at fly-half to see how the other half live! Try scorers included Reece with at least a couple, though Harvey pulled off a great tackle for Bracknell to stop him adding to his tally; plus DanP, Rhys, Callum and AndrewH amongst others.