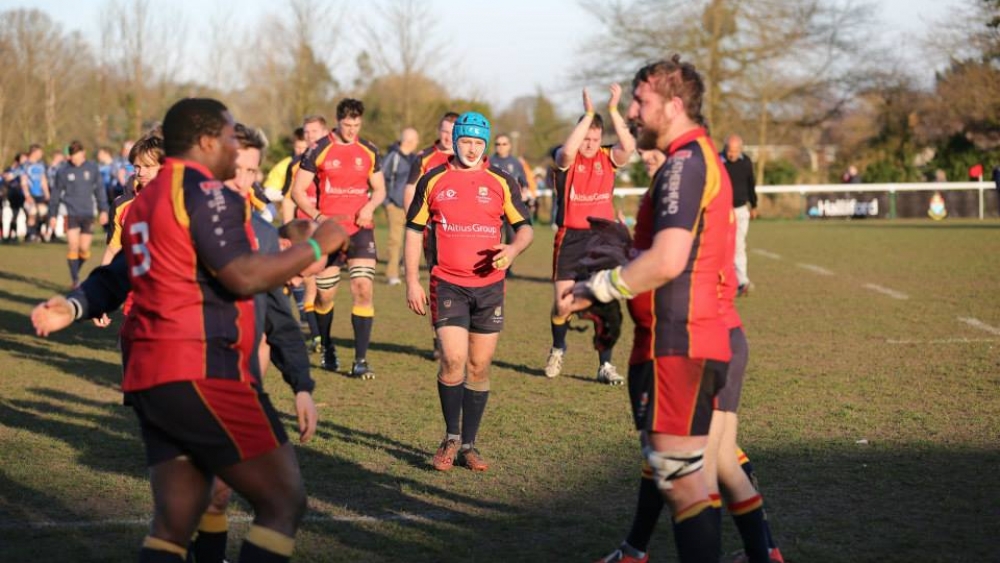 Chob returned to action at Fowler’s Wells looking to continue their winning streak ahead of a week’s recess and in doing so keep right in the promotion mix. Last week’s victory on the road at Gosport was the 11th on the bounce and with 5 games remaining it was still all to play for as four sides battled for the top two spots. In fact you would have to go back to 15 November and today’s opponents Brighton to find the last time that Chob tasted defeat. Although in mid table, Brighton with three wins from the last four were showing glimpses of the form that took them to third place last season and it was clear that based on the last three encounters between the two sides, there was not going to be much in it.

The Chobham team sheet showed a considerable number of enforced changes with Lee Evans, Ben Sims, Josh Devitt and Ollie Smith all missing from last week’s team sheet. Jamie Evans, Jerry Rumball, Oli Guy and Mikey MacDonald all came into the starting line-up and Neil Tilley joined the bench for his first league encounter. For the first time for many months bright spring sunshine lit a firm pitch although for the second week running a strong breeze blew end to end. The hosts got off to a perfect start. Alex Seers’ floating kick off eluded the Brighton receivers and was snaffled by lock Dom Sammut who charged forward and was brought to ground just short of the try line. Brighton’s tacklers failed to roll away and referee Mr Dickens who was consistently sharp on this aspect all afternoon awarded Chob an opening penalty. Seers kicked to the corner, the lineout drive got going but was stalled illegally and another penalty was awarded. This happened several times before the visitors 9, Ben Herbe tried the official’s patience once too many times and had a 10 minute sit down. The restart saw more pressure from Chob and livewire scrum half Ian Barnes took advantage of his opponent’s time on the naughty step to dive over to open the scoring. No conversion. A breathless 4 minutes played; Chobham 5 Brighton 0. It was clear that unlike last week Chob were looking sharp with the wind at their backs and recognised the need to build up the scoreboard whilst they had the advantage. Seers then had a couple of attempts from the tee as the penalty count continued to rise and on 11 minutes extended the lead; Chobham 8 Brighton 0. But the visitors, now back to full complement, started to get into the game. Their direct, hard running style saw wing James Trevis combine to put full back Abe Bredin in for their opening try. Max Morris added the extras; Chobham 8 Brighton 7. On 18 minutes with Brighton again penalised for not rolling Seers stepped up to add to his team’s tally (Chobham 11 Brighton 7) before adding a well taken try as he charged down Morris’s attempted clearance kick and gathered the rebound. With the conversion added the score moved to Chobham 18 Brighton 7. Seers had a further couple of penalty attempts from the half way line, the second of which arrowed over and extended the lead; Chobham 21 Brighton 7. Morris narrowed the gap with a well struck penalty from a solid Brighton scrum following a rare foray into the Chobham 22. Chobham 21 Brighton 10. With the visitor’s penalty count now reaching double figures Mr Dickens kept the numbers equal but pressure from a driven lineout allowed prop Sonny Kuwana to take the defender’s outside shoulder and with a mix of pace and strength the loose head crossed the white wash for a well-earned try. Seers added the two. Chobham 28 Brighton 10. Half time. Coaches Ryan Gregory and Tony Paul would have been reasonably happy with the first half. Discipline had been good and a healthy lead had been built but it would be important to look after the ball now that they were playing into the wind. S&C Coach Steve Keywood also reminded the players of the need to play for 80 minutes as from past encounters it is clear that this Brighton team will keep coming at you. With the wind now at their backs Brighton started more confidently but the Chobham defence looked resolute and secure, but on 50 minutes Brighton scored to reduce the deficit. Some direct running and good continuity allowed fly half Morris to cross the white wash and with him adding the extras the score line read Chobham 28 Brighton 17. Shortly after Seers penalised another lapse in the visitors’ discipline to ease the Chobham lead out again; Chobham 31 Brighton 17. On 55 minutes Brighton struck back again. A cross field chip was well placed and the bounce on the firm surface favoured the attack and replacement Alex Finch snaffled the bouncing ball inches from the touchline, showed great balance and scrambled over. No conversion. Chob then had a period of pressure deep in the Brighton 22 but resolute defence with Jack Thomas to the fore kept the home team at bay as they went looking for the bonus point try. Chob then fell foul of the official on a couple of occasions failing to learn the lessons from the visitors earlier, but a touch finder went dead and the Morris’s attempt from the tee was skewed well wide. Despite winning the territorial battle, Brighton failed to add to the scoreboard as the Chobham defence well marshalled by Lewis Manning and Ryan Gregory kept its shape and discipline causing errors as the visitors tried to force the game. With the clock ticking down and Buckland nabbing a key turnover play moved into the B’s 22 and Tilley joined the fray as the Chob bench emptied. However B’s had one last shot in the locker as the quick sliver Morris sprinted through a gap on his own 22 right up to the Chobham try line where he was sandbagged by three Chobham tacklers led by wing Callum Edwards. Mr Dickens was unable to see the ball grounded and despite the protests, level 6 rugby has no TMO to consult, so a 5 metre scrum was awarded and the losing bonus point was gone. Full time; Chobham 31 Brighton 22.

This was a well earnt win for Chob against a very determined Brighton team who as expected played right to the final whistle. Chob’s accuracy and discipline were the foundations of the victory and this team is now winning games that earlier might have gone the other way. Given the number of changes in key positions on Saturday this result demonstrates the strength and quality of the squad and reinforces the role every squad member can play in the promotion run in. The 12th win on the bounce keeps Chob in second place hot on the tails of Wimbledon who face Brighton in 3 weeks’ time. Chob will be hoping that B’s can do them a favour.