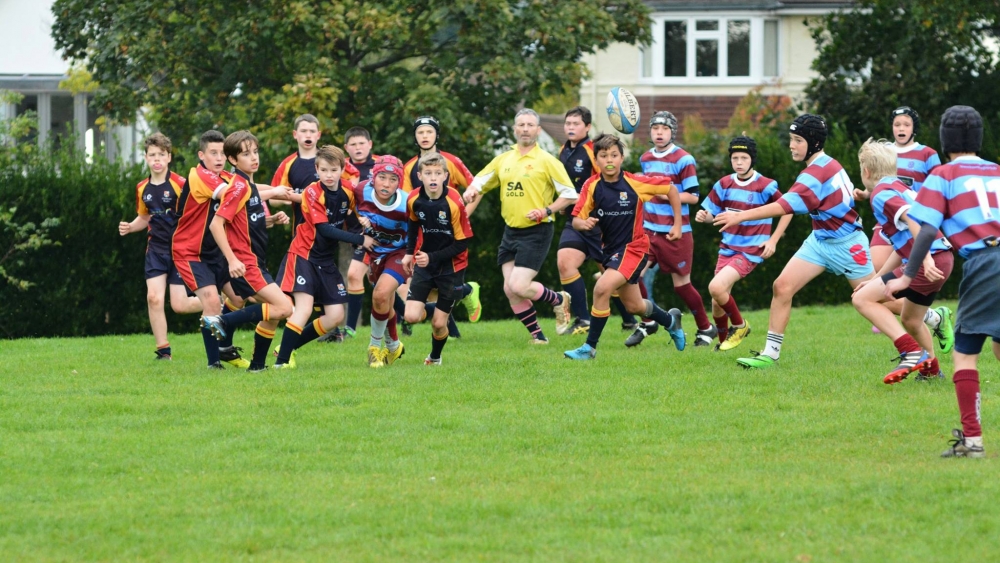 Match Report from Doug Mayger: As reward for the short hop to Bracknell, the Under 13s found themselves on the long road to Brighton, well Hove actually, on Sunday.

With a squad 24 players available coach Dan Orpin had plenty of different combinations to try out. After a warm-up session on a dead flat pitch with no grass the squad stepped across to a bigger and much wider pitch than they’ve played on so far, which had more breaks and slopes that an Augusta green, but with grass more like the rough.

The first half was played down the slope and an early scrum was run. A strong Hove pack were able to pinch the first ball but there first half tactics of kicking away possession proved an unfortunate one as Doug showed safe hands to gather in lots of space and attack the Hove line. He was held up short and turned over, but illegally said the ref who awarded a penalty. Opting to take the tap the ball went left initially to no avail before it was moved right and Dan was able to hand off the first defender before passing to Rhys to who had the wheels to go over wide on the right side. Kicking from wide out from the deepest grass was tough all game and the score remained 5-0 after a missed conversion. From the restart Chobham were under pressure as the Hove pack had the upper hand at the breakdown, something the boys battled against all day. Again Hove kicked, this time to the corner but the defence was able to scoop it and clear to the 25 yard line.

Hove continued to pressure at the ruck and kept Chobham back in their own territory. Finally they won a penalty which they took quickly, another feature of the Hove play which had Chobham scrambling all game, but poor handling led to a scrum a few yards from the Chobham line. Pressure on the scrum put the backs under pressure and the clearance was charged down and Hove were able to dive on it just before it rolled dead. The conversion was wide so it was 5-5.

Chobham were able to make a few attacks on the Hove line, with Chris making a fine run before being scragged 5 yards out and then the recycled ball being forced out a yard or two short. Harry C, making a welcome return to Chobham colours was on hand to run back another Hove clearance into the middle of the park but Hove had a spell of territory and possession to drive back up the hill. They won a penalty fairly close to the line and after a couple of phases they were able to power over for a converted tray and take a 12-5 lead.

Chobham’s pack had by now figured out a way to counter Hove at the scrum at least and won a penalty for their efforts. It was Chob’s turn to take a quick tap and with Gideon gliding down the right he passed to Doug who made a quick chip and chase only to be bundle out on the far side it looked lie feet from the line. There was still time to capitalise on being in the ‘red zone’ and MattN at the front of the line pinched the Hove throw and was able to force his way over in the corner to make it 10-12 at half-time.

With the majority of the side being swapped at half-time it was perhaps understandable the new boys would take a few minutes to get the pace of the game. Hove, having kept the core of their side intact were out of the blocks faster and playing down the hill scored early and near the posts to stretch the lead to 19-10. Soon after the score was 24-10 as a blindside break from the Hove 9 allowed a score in the right hand corner again. Hove put the pressure on Chob again from the restart but a good scrum allowed a kick to clear the lines slightly and at the next scrum the ball was held cleanly for Sam to feed HarryB to go on the charge and take play up the field and up the hill.

The opposition were able to regain possession and attacked left but were driven into touch and this seemed to lift the whole squad. Three times more Hove pounded away driving from rucks and three times the defence was ready and the danger was averted.

As the clock ticked down Chobham were able to work their way into reasonable field position and space down the left let Connor make 40 yards before cutting right across the park. Unfortunately the final pass didn’t come with a three on one overlap and the chance was lost.

The boys kept on grafting and both Lewis and MatthewW carried prominently to keep Hove on their toes. In the final moments another break left gave Connor the chance to close the deficit with a lung bursting charge up the left wing to round the defence, but still remember to dot down under the posts for Gideon to kick the simplest of conversions to make it a seven point game at 17-24.

A final score to level the match proved elusive and Hove ran out winners 24-17. The boys however acquitted themselves very well, fronting up and sticking together against a feisty side who wanted to mix it at the break down. Coach Dan Orpin commented on a ‘pleasing all round performance against a strong squad with progress being made’ as the boys get to grips with the 15 man game.