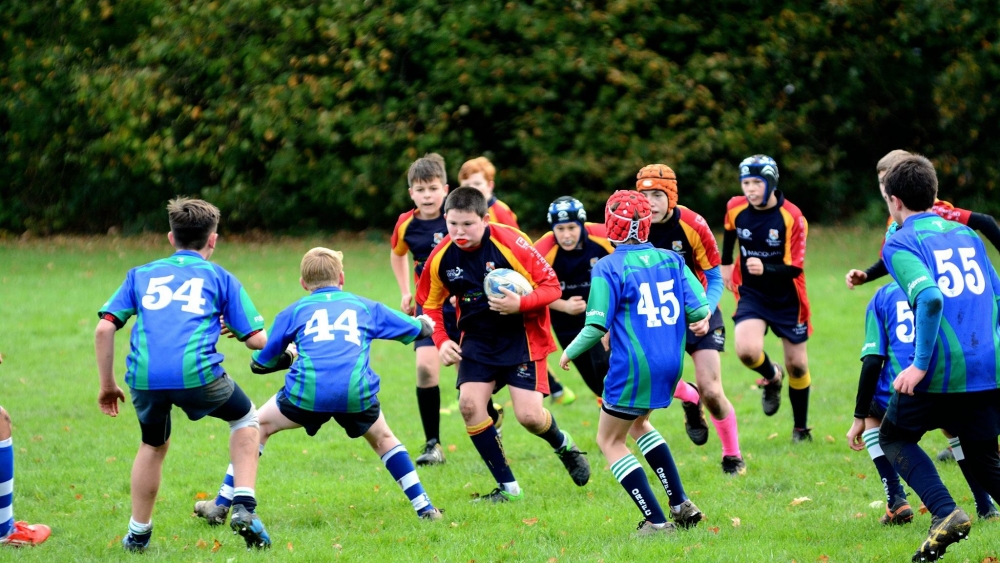 Chobham Under 13s hosted a Reigate Under 13 squad made up of players from both Reigate and Old Reigatians on Sunday morning.

With only the one pitch available in the orchard the day was split into 4 periods of play, alternating between B and A squads to keep the boys moving.

The B team played the first period and got of to a great squad. By the time the ref blew his whistle the next time after starting the game it was to signal a try to the home side. TommyW caught the kick off and made immediate inroads into the Reigate defence. Good ruck play allowed the backs to work the ball to left and right marching downfield before Samuel was able to reach out for the score out wide for an early 5-0 lead. The action was almost repeated from the restart with Chobham taking play almost to the Reigate line again before conceding a penalty in front of the posts. Reigate were able to retain possession but found it hard going up the slope and ran out of steam around halfway and Chobham won a scrum. Good hands took Chobham back down field before going into touch but Joe pinched the throw and a good forward drive allowed TommyW to steal over for the second try, with Samuel adding the conversion for a 12-0 lead.

The remainder of the short first period was played out mainly in the Reigate end but Chobham were unable to find the killer pass to go three tries up. The second period started with a Chobham turnover from the kick and play moving within 5 yards of the opposition line. The third try came from another Joe take at the line, this time Callum being on hand to dart blind and go over in the corner to make it 17-0.

Reigate enjoyed a little more possession but little territory as the home defence kept them pinned back, MattW spilling claret for the cause with a whack on the nose. A couple of penalties and strong driving took Reigate deep into the Chobham half for the first time but a turnover on the line allowed Chobham to clear the line. Lewis was first to the bouncing ball and got to halfway before being caught. Harvey had been hot on his heels and picked up to race over unchallenged in the corner to finish the play at 22-0 to the hosts. The A squad then took to the field to try their luck. Kicking uphill first Chobham restricted the first Reigate attack to the halfway line as they earned a scrum. A blind side break from Connor made some ground but a good defensive tackle into touch halted forward momentum and gave possession to Reigate. The away A team were able to retain the ball well and eventually made it into the Chobham 25 before giving away a forward pass. Chobham countered with a drive back to halfway and passing along the line to Seb hinted at what might be possible with the defence stretched before recovering to kill the attack.

Reigate once again drove well to get into the red zone and a good line by their main attacking attacking threat led to a score under the posts and a 7-0 advantage. Having worked out that this tactic would be effective down the hill Reigate camped in the Chobham half and prevented the home side from playing any rugby. Quickly swapping ends Chobham had an early chance from a tap penalty spun wide to George and then kicked deep towards the Reigate line but a penalty given away allowed Reigate to advance back up field.

The remainder of this first ‘match’ was a slugfest in the middle of the park with neither side being able to create any try scoring opportunities through a combination of strong tackling and too direct play making it easy for the defence to wrap up the attacks and Reigate finished with the 7 point advantage.

The third short period of play started much the same as the first as Chobham pinched the ball at the kick off and passed the ball round the Reigate defence for Ethan to open the scoring.

The Reigate defence offered much more in this second encounter and kept Chobham at bay for almost the entire game, but couldn’t mount a serious assault on the Chobham line. Late in the match Lewis broke through the defensive line around 40 yards out and streaked away to double the score at the final whistle at 10-0 and an excellent clean sheet in defence. On to the final game and Chobham kicked downhill to Reigate A. Jack was first to the ball and made the first two tackles to keep Reigate on their heels. Turnover ball was finally made good use of with swift handling creating space out wide where George was held up 5 yards short. A solid ruck won the ball and it was shipped left where there was a clear overlap but Chobham were guilty of carrying the ball too far and a certain try was blown as the ball was spilled forward in the tackle.

Reigate were unable to make ground upfield and were reduced to kicking the ball away on several occasions. Doug was faultless under every kick and carried the ball back with purpose and making a couple of excellent chips to keep Reigate pinned right back on their line.

In the end Reigate’s desperate defence started to concede penalties and from a tap and good ruck play the ball was again spun wide menacingly though the final couple of yards proved too much.

There was time for another couple of attacks towards the line with Chris being held up practically over, and then a scrum against the head and some rather hopeful passing ended up bouncing kindly for George to make another push for the line only to be driven into touch a yard or two short and the final period ended 0-0.