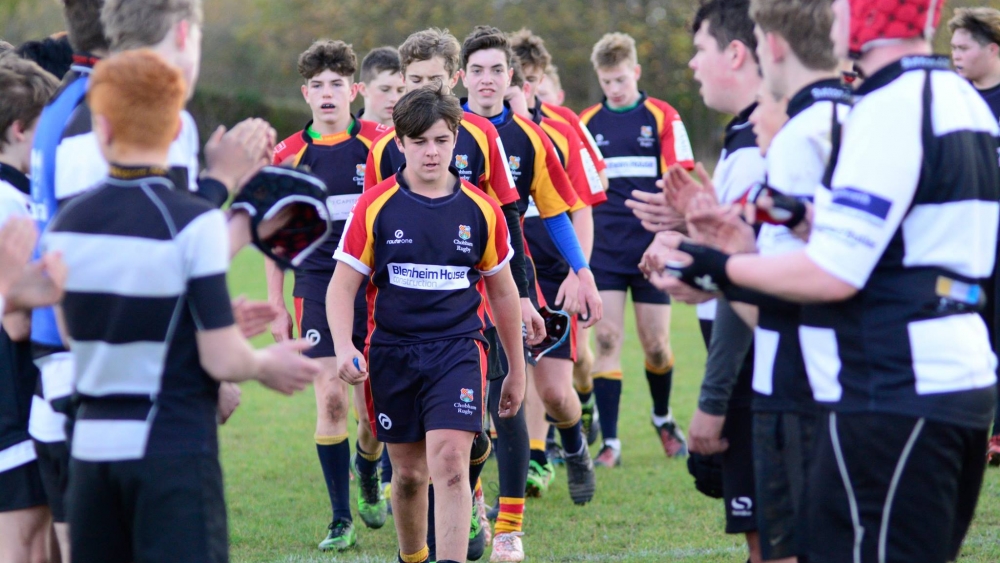 It was cup time for the under 15s and once more Chobham As had been drawn against Sutton&Epsom, this time over at Priest Hill. With injuries and unavailabilities, plus the Bs being in action, it was a bare fifteen players that crossed the whitewash to start the game.

Once more a slow start from Chobham gave Sutts first dibs with the ball, losing it at the first ruck. Swift hands gave the Sutts express winger space to break round the outside, but was tackled a couple of yards short of the line. The ref deemed this to be a ‘seatbelt’ tackle over the shoulder and awarded a penalty from which the opening try came from a quick tap and an unprepared defensive line. The extras were missed but Chobham were 0-5 down inside the first couple of minutes. The game resumed at the same frenetic pace that was way too quick for the Chobham linesman who was behind the play on numerous occasions. With the early wake up Chobham realised that they weren’t going to get an easy ride and set about clawing the score back. They were guilty of trying to play too much rugby and forcing the play, rather than sticking with a game plan of drawing in the defenders. With around ten minutes on the clock having won a turnover at a ruck, a loose pass was intercepted by a Sutton three-quarter who had a free run to the posts for the second score and Chobham were 0-12 down.

The boys then started to turn the pressure on the home side. A series of drives forced Sutton to concede penalties and Chobham were in the red zone and putting pressure on the scrum. Somehow the Sutton 9 managed to fumble a ball at the back of the scrum that Gideon was able to pinch and race the 25 yards for Chob’s first try, also making the conversion and a 7-12 score. Before Sutton could blink they were behind. Connor caught the restart and set a ruck in midfield. Very quick ball was won and Chris burst through at full pace going all the way to draw level and nudging Chob ahead with the conversion.

Just before the half-time break Chob managed to go further ahead. A penalty kick to the corner and a catch and drive almost reached the line. Fin was then held up just short, but illegally and a quick penalty saw Doug almost cross, being tackled just by the tail of his shirt. Solid rucking retained possession and Chris squeezed over for his second and the score was 21-12 at the break. Playing downhill second half Chob might have thought they had a decisive lead but no such luck as Sutton scored very early from an attacking scrum, the 8 going over with Chobham temporarily down to fourteen. The lead was now just four points.

Chob were quick to respond however pinching the ball from the kick. Reece bludgeoned his way to the 25 before the backs were again released to the left. Tidy handling and another quick ruck created an overlap and Aran had the pace to dot down in the corner to extend the lead back to two scores at 26-17.

Chob then became a little eager for the killer blow and were pinged a number of times at the breakdown and for offside. Sutts had the opportunity to go for a drive using their heavier forwards but solid work meant they were held up and Chob got a scrum to clear the lines. Terrier like defence forced Sutts back almost to halfway and a scrum tight to the right side. With the winger up tight and the fullback in centre field there was a big gap to exploit with a box kick in behind the scrum. A friendly bounce was then all that was needed for Chris to seal a hat-trick as he sprinted away under the sticks. With the clock running down and Chob’s lack to subs maybe bringing on a little fatigue, Sutton managed to work into Chob’s 25. Another 8 pick was halted at source but the defence was penalised three times in quick succession and Sutton managed to reduce the deficit to 9 again at 33-24.

Going into injury time Chobham won a penalty around the 25 yard line and opted to go for the posts, to push out the lead and burn down the clock. The kick was successful and Chob were able to retain possession from the restart. Chob were eventually awarded a scrum and Reece again charged his way down to the 25 yard line. Perfectly timed support and a deft little offload to Gideon gave him the room to race away too the corner to score the final try of the game with the last play.

A final score of 41-24 put Chobham As into the quarter final of the Waterfall Cup where another repeat of last season might be store as they will play Old Rutlishians or Esher.