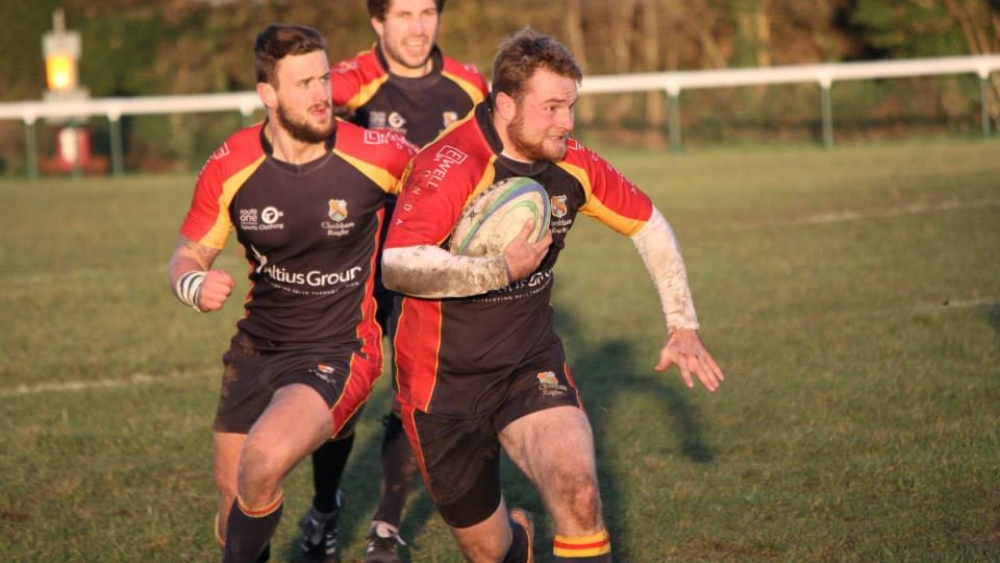 Chobham were glad to be back on home turf after the win in south London the previous week and having had Chris Robshaw in attendance at training. The last home game before Christmas provided a festive backdrop to the match. With the sizeable crowd well fed by Chobham chef Dave Buchan’s turkey lunch, the onus was now on the players to serve up their own rugby feast.

The Chobham team sheet showed a youthful hue with tyros Aaran Mawson and Sam Forbes in the starting line up alongside last week’s try scorer Liam Monaghan who stepped up from the bench to replace the unavailable Ben Sims. Visitors Hove whilst having had a difficult campaign so far and finding themselves propping up the league had still delivered some notable performances and weren’t to be taken lightly. Bright winter sunshine and perfect underfoot conditions greeted the players. The hosts started the board moving in the first minute when Harry Guy eased over a penalty as Hove infringed at the first ruck. Chobham 3 Hove 0. 5 minutes later, another Hove offence created field position for a line out which was expertly marshalled allowing Euan Buckland to burrow over for the score. Guy converted. Chobham 10 Hove 0. Was this going to be the start of a rout? Well not according to Hove who stormed back playing a high tempo, offloading game which resulted in full back Brad McCarthy going over. With extras added, the scoreboard read; Chobham 10 Hove 7. Hove continued with their enterprising play. A Sam Whiting penalty attempt missed, a drop goal drifted wide but then Hove fly half Jack Hancock touched down and with the conversion going over the scoreboard suddenly had an unexpected look about it. Chobham 10 Hove 14. This didn’t last long as 2 minutes later on 24 minutes, Aaran Mawson crossed the whitewash and soon after a copy of the earlier lineout catch and drive allowed Buckland to add his second and with Guy converting, normal service seemed to be resumed, or was it? Chobham 22 Hove 14. On 30 minutes Chob struck again as Ollie Smith moved the attack forward. Guy took his off load before finding the flying Ulsterman Josh Devitt at pace and he raced over for the bonus point score. Guy converted. Chobham 29 Hove 14.  Smith again was prominent in eth next score as he linked well with Forbes and James Dunne before shipping the pass to wide man Monaghan to open his account. With the conversion added the score board read Chobham 36 Hove 14. There was just time for Monaghan to add a second and Chob’s sixth of the afternoon before the referee Matthew Dunn blew for half time. Chobham 41 Hove 14.

Despite the scoreboard having a healthy look to it and with the bonus point already in Santa’s sack, the coaching team of Ryan Gregory and Tony Paul took their men to task for their sloppiness particularly in defence which allowed Hove a brief sniff of glory. Tightening everything up was top priority in H2. Hove came out of the blocks quickly and a well-constructed catch and drive allowed them to open the scoring. Chobham 41 Hove 19. Devitt then scored after some quality handling. Guy converted. Chobham 48 Hove 19. Hove then hit back with a converted score which gave them only their second bonus point of the season. Chobham 48 Hove 26. At this point Chobham stalwart Theo Norman- Walker remarked dryly, “we are a bit hot and cold today!” In keeping with this sentiment, Chobham’s Christmas generosity continued as a speculative off load fell straight into the hands of Hove’s Ryan Morlen for their fifth try. Extras added. Chobham 48 Hove 33. Devitt stretched the lead again he sniffed out an intercept and raced over for his hat trick. Guy added the two points.  Chobham 55 Hove 33. On 65 minutes his fellow wing man Monaghan bagged his treble as he opportunistically dived over from a short range tap and go. Guy converted. Chobham 62 Hove 33. On 75 minutes Smith got on the score sheet for Chob’s 10th try of the match and with Guy notching 9 of his 11 attempts with the boot, the home score now amassed 69 points. Final word to the men from Sussex though who battled hard all afternoon and the impressive McCarthy went over at the death to make the final score Chobham 69 Hove 38. Well, the spectators certainly went away happy having seen a festive spree of try scoring with an aggregate score of 107 points and 15 tries cheering even the most Scrooge like amongst the crowd. Having said that the Chobham coaching team will as ever be delighted with the cutting edge of the team’s attacking play but will be disappointed with the rigour of the defensive shape and the careless management of the ball. No doubt training this week will focus on that ahead of next week’s pre-Christmas fixture at Twickenham. Although Chob won convincingly at Fowler’s Wells on the first weekend of the season, they know they will need to be much sharper next week. With the top of the league table starting to look as congested as the shops on Black Friday, top of Gregory and Paul’s Christmas wish list will be a strong performance with the points firmly in the Chobham Santa’s sack.