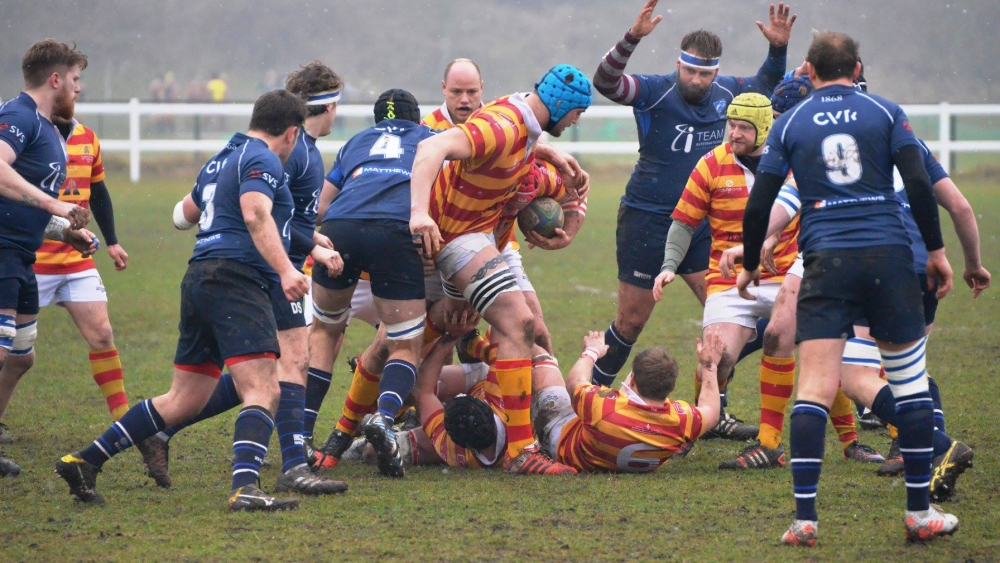 ‘Basalt Global’ sponsored Chobham dominated the game for 60 minutes but the 20 they did not; cost them the game and with it allowed Brighton to escape from the relegation zone.

A cold snowy day greeted both teams at Waterhall on Saturday and it was the travelling away supporters (including those who cycled the 60 odd miles to the game) who were buoyed and warmed by the opening 15 minutes as Chobham showed class, and style as they looked to secure the double over struggling Brighton. In the 12th Minute Josh Devitt who is so lethal when given space, eased past three defenders to open the Chob scoring, Alex Seers slotting the conversion – 0-7.

Brighton had no answer to the power and forward domination being showed by Chobham and in an effort to stem the tide, slowed the ball down at all times, so often that the referee had little option but to send a Brighton to the bin. Seers took advantage with a penalty and Chobham eased into a 10-0 lead without being off the bridle. This is when the bad Chobham began to dominate over the Good Chobham, with 35 minutes played, Chobham went to sleep, and allowed Brighton to get back into the game, and it was Chob who had to slow the ball down, in the 39th minute, Chobham had scrum half Ian Barnes sent to the sin bin for a ‘high tackle’ Barnes 5’7” tackling the 6’4” Brighton lock – No I could not see that either!! The man down lead to Brighton being given a lifeline and they took advantage and scored a try out wide through the open side flanker. The half time whistle came in good time for Chobham to regroup, alas it was Brighton who came out firing.

In the opening 5 minutes of the 2nd half, Chobham still a man down, Brighton hit the away side for six as they sauntered their way to two tries in a matter of minutes. The tries one scored by their No 5 and the other made by him as he made the Chobham defence look like it was men against boys. The first try was made by a kick ahead by the Brighton Lock who was unchallenged and managed to get a pass away for an easy score under the posts, the next was scored by the Lock who again went in unchallenged as Chobham seemed to think it was tag rugby! The 14 points killed off Chobham who looked shell shocked at what they had just seen.

Chobham now 19-10 down had to begin again, but this took too long to happen and it Was Brighton who extended their lead on 55 minutes’ as again Chobham had a fear of tackling. 24-10. The final ten minutes saw Chobham suddenly realise that they were actually in the game but it was all too little to late and all they managed was a consolation try by Dom Sammut in the final minute of the game, converted by Seers but Chobham went down 22-17.

Much was said post game in the team huddle and it is hoped that the words will be heeded. Next week Chobham are at home to bottom placed Gosport, a win is very far of the cards after this current performance, and this will be a chance for the players to put right this poor performance. Kick-off is 2.30pm.