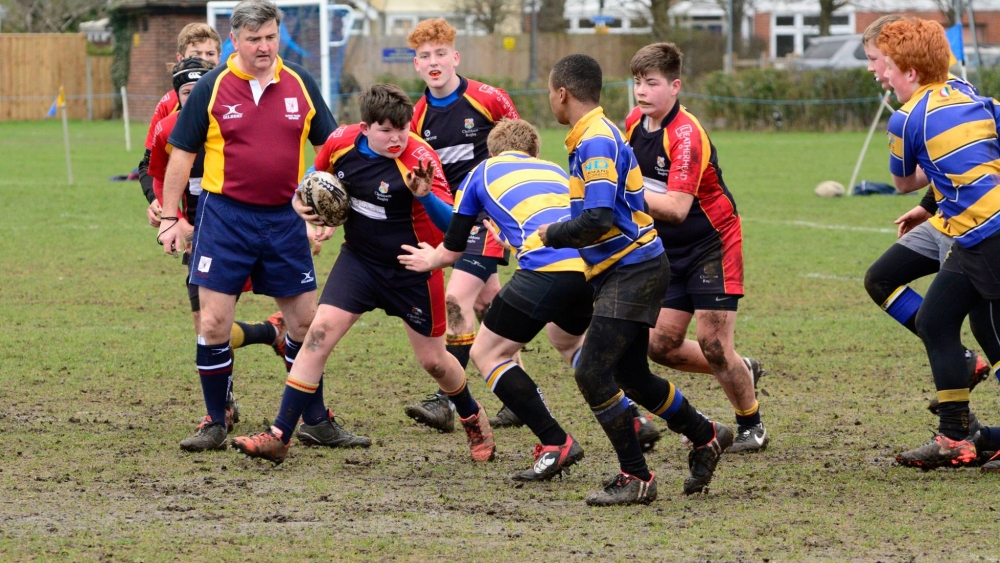 It was quarter-final day for the U14As with a trip up the A3 to face Old Ruts, a side last encountered in festival days in the U9s. After a positive warm-up Chob started with a gusting wind at their backs as Old Ruts took the kick-off. The kick was gathered cleanly and straight away Chob looked to play with width as they worked the ball down the right flank only to fall foul of the refs whistle at the first ruck.

Ruts opted to run rather than kick and very quickly the strong running centre was introducing himself to most of the boys in blue as he danced right and then left through soft defence and opened the scoring with a try in the left hand corner. The tackling memo obviously hadn’t been sent this week. Undeterred Chobham kicked off and tried to exert pressure on Ruts in their own half. Ruts conceded a penalty and Chob kicked for a lineout 15 yards out. A solid catch and drive moved play close to the Ruts line before Reece and Connor both had a dart for the line. They were held up but Chob had a 5 yard scrum with a nice wide blind side channel. The scrum, which had the upper hand all match, did their job and Gideon stepped into the space on the right. Chris had made an arcing run as fullback from open to the blind side and took a well-timed pass into the big gap to go over from short range, levelling the game at 5-5 with the conversion missed.

Chob looked to be a bit ring rusty, and the wind wasn’t helping as the game meandered slightly, though not for lack of effort from either side. Ruts were good at the breakdown keeping Chobham possession down as they tried to use the weather advantage in the first half. Ruts had the next scoring opportunity as they continued to drive tightly around the ruck and almost reach the line before a Chob hand was able to pinch the ball. A long clearing kick with wind behind and a great bounce carried play right back to the Ruts 25. After a couple of phases Ruts had a scrum but the visiting pack worked hard to take it against the head. Reece collected at the base of the scrum and shrugged off a couple of tackles before wriggling over and carry Chob into the lead at 10-5. At the restart the forwards showed some deft handling as Tommy caught the initial kick before offloading to Reece. Some neat link work from Hugh put Oli into space and on the hoof to immediately take play back down to the Ruts 25. For the remainder of the half Chob pressed in Ruts territory but couldn’t create any clear cut chances and stretch the score before turning to face the wind.

It was game on into the second half as the boys looked to win the ball straight back. Ruts tried to drive in tight again, but a steal from Dan and George was darting away down the left flank, to be brought down illegally. From the resulting lineout the pack surged around MattN with the catch, to carry close, before releasing the ball and Tommy was on hand out at second receiver to cut through and extend the lead to 17-5 with the simplest of conversions.

It was time for the spectators to tell each other that the next score would be crucial. Al set the restart tidily allowing the backs to start opening up and a nice loop move led play back into Ruts territory with an attacking scrum. Harry was out wide on the right wing and wriggled and squirmed for the line to be held up a fraction short. A missed Ruts clearing kick gave Chob another chance to attack with Adam out left making a dash for glory, and then Charlie burst through to push play close to the Ruts line once more.

Chobham were able to keep Ruts tied down in their own half as the hosts opted not to use the boot to push them back, giving Jack little chance to carry from fullback. Instead they kept the ball in hand, looking to drive around the fringes or with a front peel from the lineout. The killer score came without about 10 minutes left, again from first phase. A feint right from Fin before cutting left was enough to create a gap and take the score to 22-5.

Ruts kept playing and their driving tactic pushed Chobham back finally into their own half and won a series of penalties. The quick tap had been used a couple of times and from a third penalty the defence seemed to expect the same as they rushed to meet a ball carrier. But a delay on the pass wrong footed the cover as the ball carrier was able to dart through and make it 4 tries to 2 and 22-12. As the clock ran down the three-quarters created the try of the game. From a scrum on the right hand side a double loop in the middle totally confused the defence and when the ball reached Adam on the left wing he had the simplest of tasks to dot the ball down unchallenged and a 29-12 score line.

With a minute left the Chobham’s ‘exit strategy’ from the restart was poor as a bouncing ball went deep and Chob were caught offside. The game finished as it started with the Ruts centre going over for his second try, before the conversion hit the crossbar and bounced over from wide out to make the final score 27-19.