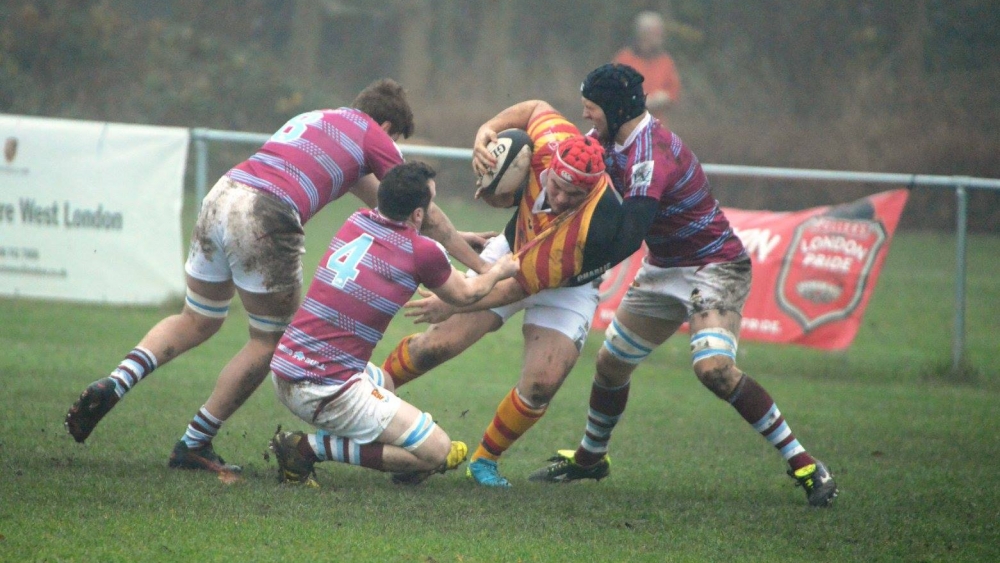 ‘Basalt Global’ sponsored Chobham made the short trip to the Banks of the River Thames to play Chiswick in their final encounter before the Turkey, Mince pies and presents appear on Christmas Day.

Santa must have been disappointed with the Chobham players behaviour all year as he failed to deliver the presents in the form of the result.

Chobham dominated 65 minutes of the game and looked great value for the 17 point to 8 lead at half time, Chobham getting points on the board courtesy of Hooker Ollie Wakefield who went over following a powerful rolling maul after just 5 minutes, Josh Devitt scoring Chob’s 2nd try on 20 minutes as the back line ripped through the Chiswick defence. With conversions and a penalty by Alec Thomson Chobham looked home and hosed. Hopefully the half time team talk would help Chobham, – it did not! With the removal of Ryan Gregory at the break as he was suffering from a virus, Chobham looked vulnerable and Chiswick took full advantage in the opening periods of the half and in the space of 10 minutes took the lead which was very much a surprise as Chob had been so dominant for the other 50 minutes.   Chiswick led 23 -17 – What did Chobham have left? Well Chobham dug in and began to play as they had done in 50 out of the 60 minutes so far played, they came back at Chiswick with gusto, pride and showed that a wounded tiger was not to be messed with. In fairness Chiswick defended like tigers themselves and as Chobham drew level through two Alex Seers penalties, it looked as though Chobham could grab a well earned victory, a last gasp drop goal by Seers sailed just wide and in the end the spoils were shared.

This was very much two points lost rather than two gained, Chobham must learn how to close out games and use a missing killer instinct to finish sides off when in the ascendancy.

Well it is all over for 2016 and as we head into Christmas the Club look forward to ending their 50th Year on a high.