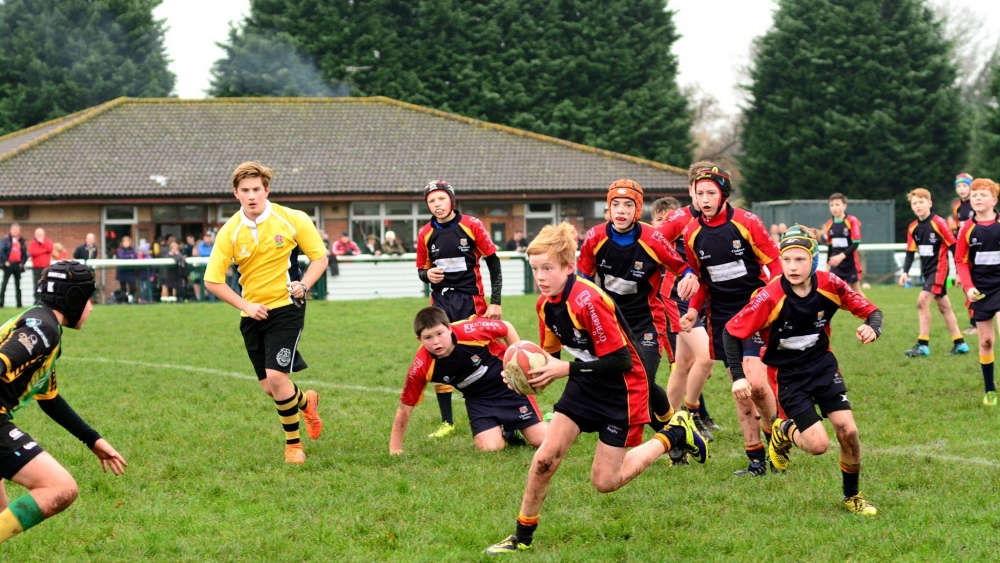 The first half started with Chobham defending the housing estate end, and were immediately put under pressure by the visitors chase from the opening kick-off. Driven back as soon as the ball was caught the opening sequence ended with a penalty to E&L. The tap penalty set up a good position in the Chobham 22 and by showing patience and ball retention E&L created space wide out right for the opening try in the first couple of minutes. The try count was doubled from the restart as a long kick was returned down the left wing. With the home defence scrambling another confident handling move let to a score on the right hand side again, the conversion being taken this time for a very early 12-0 lead.

Chobham were very much on the ropes by this stage and were soon defending their lines again. From a short penalty E&L drove hard for the line but were held up short. The visitors recycled quickly and a dive close in to the ruck was just enough to extend the lead to 17 points with less than 10 minutes played. Desperate for any kind of foothold in the game a good kick-off was won by the Chobham pack and they were able to make a few passes in the E&L half before being squeezed into touch. E&L kept up the pressure and were soon on the attack again kicking downfield for a Chobham lineout in the 22. Chobham couldn’t win the ball cleanly and had to defend into their in goal area to stop another score and concede a 5 yard scrum. A good scrum put the E&L backs on their heels and the attack was kept out as Chobham won a scrum and could try to clear their lines.

Safe hands worked the ball to Connor in space and he was able to test out the E&L defence for the first time breaking well into their half. A penalty at the ruck was quickly followed by another for not retreating and Chobham seemed to realise that they were in a game. More direct running and E&L infringements took Chobham deep into the E&L 25 for the first time before a turnover meant a Chobham lineout on the left side. The attack developed slowly and Chobham were able to string several phases together before Gideon chipped over the E&L backs and with the help of a home team bounce was able to gather and touch down. The try was awarded despite the cries of ‘knock on’ from the E&L team and coaches, and George was able to add the extras with a kick that had just enough to get over the bar. This galvanised the Chobham side that went close again just before the break after a clearance kick was charged down but couldn’t quite be capitalised on. So 17-7 down at half-time after what felt like it could have been a rout and some confidence restored to the side. A knock-on from the restart gave Chobham good field position and hard running forced the first of a mounting number of penalties against the visitors. A kick to the corner followed by a steal at the lineout created a driving maul but E&L were able to prevent a score that would bring the sides closer together.

Chobham now had the ascendancy in territory and only occasionally could E&L mount anything like an attack at the other end. One such attack ended in a Chobham penalty after a good scrum which was kicked long by Doug. The kick didn’t make it to touch but a good chase was set to put the E&L fullback under pressure before the E&L tight head stepped across Doug’s chase and sent him sprawling to the deck. Charlie no doubt felt a degree of schadenfreude as the ref went to his pocket for the yellow card and Chobham had a one man advantage for 5 minutes.

The penalty count kept on rising as Chobham pounded away scrum in search of another score but couldn’t create the opening that might have set up a really tense finish. The best opportunity came after a series of rucks had pushed E&L back and a grubber was kicked to the left hand corner. Connor was on the chase and managed to toe poke it over the try line but it took a nasty hop and was out for a 22 drop out. E&L showed they hadn’t forgotten how to play as they went close in the dying seconds of the game, but Chobham pinched the line out to prevent any scores in the second period as the whistle went on a 17-7 loss which had looked like it was going to be a lot more in the opening few minutes.