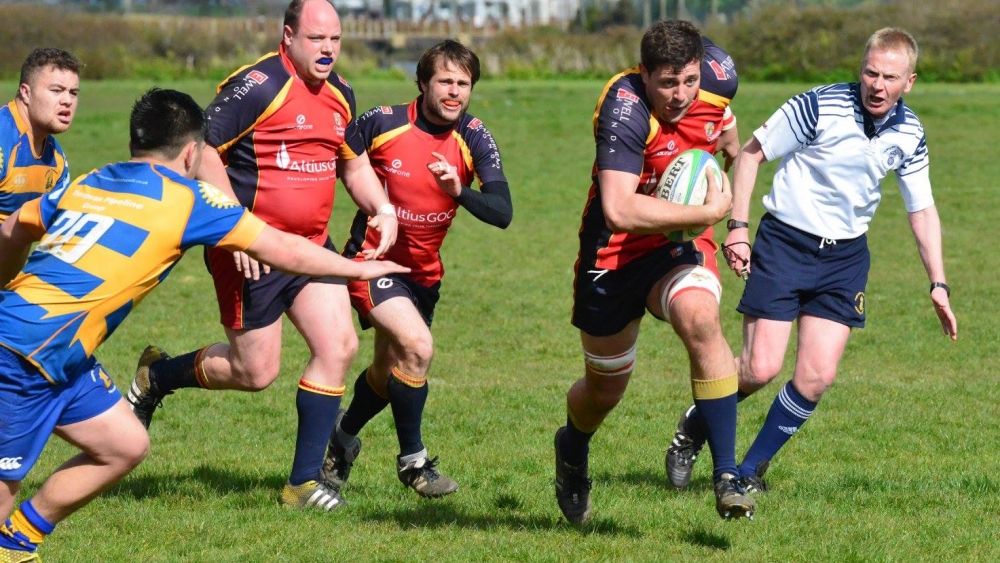 The final day of the season brings about strange and sometimes unexpected results, with the hosts saved from Relegation by the Medway fiasco, they had little to play for. Chobham had much to prove and so the scene was set a try fest.

Chobham were without Head coach Ryan Gregory who had been called in to hospital only hours before kick- off for a much needed operation on his back, just coming out of the anaesthetic he still managed to keep in touch via Social media and what he saw and read must have delighted him.

Chobham opened the scoring after only two minutes with a piece of individual skill by Alex Thomson. Collecting the ball just outside his 22, he ran, gave an up and under that could genuinely have had ‘snow on it’, he ball bounced kindly straight into his arms well inside the Gosport half and with a swerve one way then the next, he sauntered in under the posts. With the kicking duties he duly obliged with the first success of what would be 12 kicks from 13. Chobham 7 Nil up.

With Chobham still celebrating, Gosport took full advantage and as if they had a green light, they ran in a try of their own and with the conversion it was 7-7n after 3 minutes. This was going to be a classic, on 5 minutes, Chobham won a penalty on the 10 metre line, they opted to go for the kick and Thomson obliged, 7-10. Tries then flowed at a fast rate if knots (note the nautical term as we were in Navy country). On 7 minutes Josh Devitt scored the first his brace, Dan Mays ran one in on 10 minutes, Ollie smith managed the first of his brace on 16 minutes all converted, added to this another Thomson penalty and Chobham led 34 points to 7 after only 16 minutes and a bonus point in the bag.

The game went into a lull for the next 14 minutes until Gosport began to have some fun and run in a try out to the Left hand side, they trailed, 34-12.

Chobham then began to play with the flair and passion that we all knew they could, they entertained the large crowd with some sublime rugby, with off loads and running lines to match the very best you would see. On 35 minutes the back row took over and tries from Chris Kent and Smiths second was really putting the home side to the sword, with Thomson selecting the right kicking boots for the day – being successful with all of them. Half time Gosport 12 – Chobham 48.

At the start of the second period it was Gosport who fired first, inspired by retiring coach Neil McRoberts words at half time, he told them to go and have fun, Neil a great stalwart of the since the age of 4. On 44 minutes Gosport pulled a score back and with the conversion they trailed 19-48.

Chobham were in no mood for sentiment and they themselves began to join in the carnival and have fun. Once again the handling was excellent and the patterns of play outstanding. The tries kept coming, first Joe McVey, then having only been on the pitch a matter of seconds and playing in the back row, Ollie Guy showed his backs skill to score, this was out to the left hand side and the conversion was Thomson’s only blemish. Devitt not one to be left out of the action too long scored his brace, Callum Edwards another one to come from the bench added the sides 10th try, but not to be left out, the lively scrum Half Ian Barnes saw the parting of the Red sea and scampered in to record the League’s biggest score of the season and to hopefully set a marker down for next Season.

Next season will be the clubs 50th Anniversary, this all begins at the start of the Next Season on September 2016.