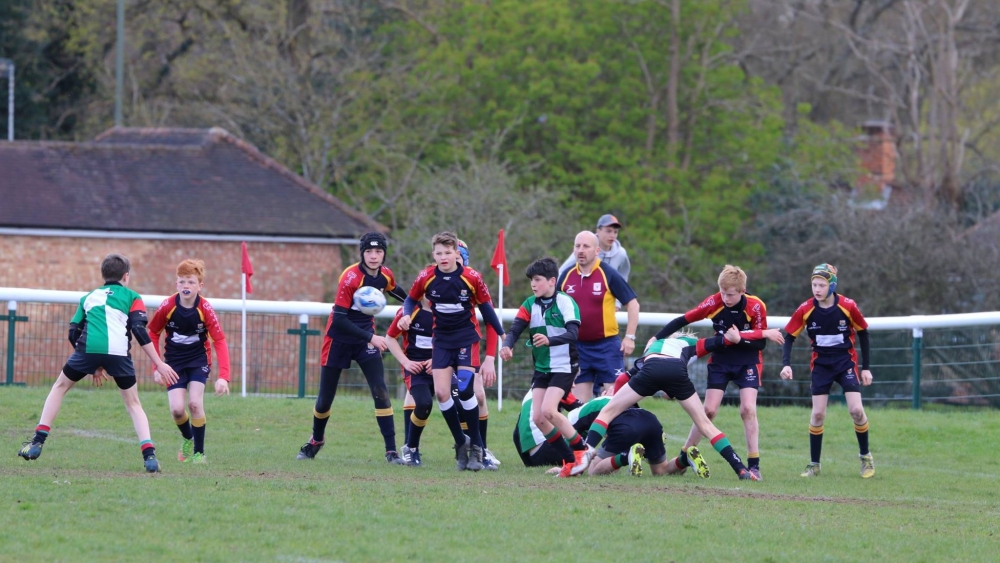 Match Report from Doug Mayger : Chobham were given a rugby lesson on Sunday morning by a powerful and well-drilled Battersea Ironsides XV at Fowlers Wells. The match was a 3rd/4th play-off as part of the inaugural Waterfall Cup and a tough match for MattW to make a well-earned debut with the As.

The initial kick from Chobham didn’t make 10 yards and Battersea were handed the earl y momentum with a scrum on half way. The visitors attacked left and with neat hands that were to become a frequent sight throughout the game took play into the home 25. A solid ruck and a dart left allowed a score in the left corner, with the home side feeling unfortunate that there was no linesman on the far side to see a foot in touch. The conversion was missed and Chobham tried to take play into the Battersea half. With Battersea being offside at a maul a penalty was kicked into Battersea territory. Kicks were exchanged before a winning a further penalty taken quickly for Harry to set up a good driving maul which carried play 15 yards down field out but Battersea were able to get a hand in and win the scrum.

Battersea continued to look composed on the ball and disciplined at the ruck with Chobham forced to scramble and play without the ball. After 10 minutes the visitors were able to create space again and with the help of a couple of soft tackles were in under the posts for a 12 point lead. This seemed to break the resistance of the home side and the Battersea prop was able to carry almost at will setting up a number of good positions in the Chobham half. With the lion’s share of possession Battersea were able to extend their lead with every significant attack and a further four tries were scored to make the half-time score 34-0.

This was extended moments into the second half with another score created by quick ball and effective passing so it was 39-0 and a long half to try and stem the tide. From the next restart Battersea tried to drive forward through the big forwards but a great tackle from Danny halted the attack in the Battersea half. This effort from the smallest guy on the pitch finally seemed to rouse Chobham who at last had a spell of pressure in the Battersea half. From a scrum on the left, probably the one area of parity on the day, the ball was moved down the three quarters. Chris stepped into the line from fullback, beat his defender and set off for the line. The Battersea defence was on the back foot for the first time and Chris was brought down just 5 yards from the line. Somehow Ironsides were able to kill the attack and earned a scrum from which they were able to clear downfield.

For a few minutes Chobham were able to keep Battersea at bay as injuries and substitutions slowed down the game. Solid defence on their own line led to Chob winning a penalty as Battersea infringed. The defence was finally breached a couple more times out wide with Battersea going back to basics and were able to capitalise on mismatches in the defensive line and full-time was called with Battersea being worthy winners. The whole age group now have a final couple of matches in South Wales this coming weekend to celebrate their first junior season and see if they can finish on a winning note.