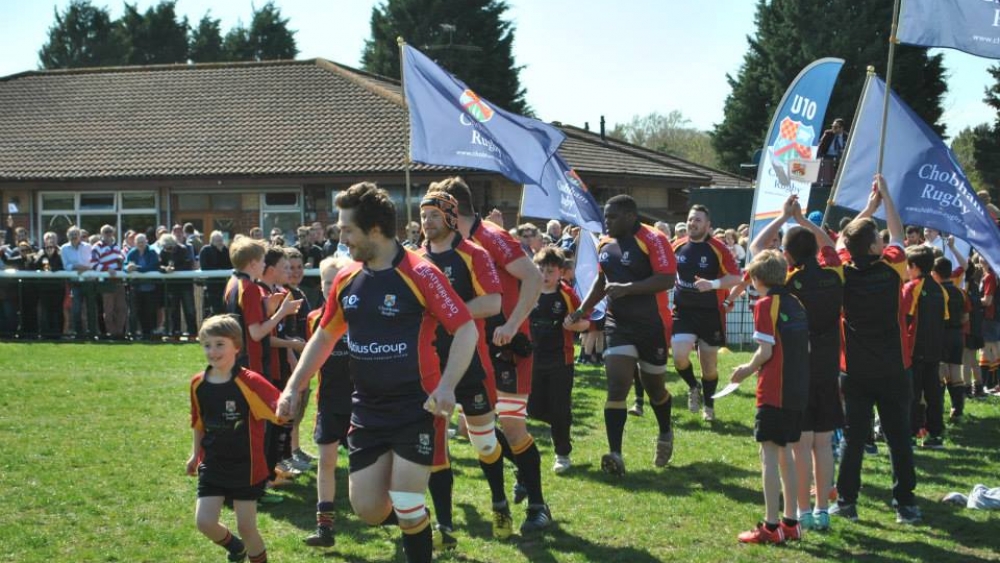 With Chobham, Wimbledon and Sutton & Epsom all in the promotion mix there was a “Surrey Super Saturday” on show. League leaders Wimbledon were hosting Sidcup with S&E down at Broadwater, whilst Chob welcomed Havant to Fowlers Wells with one thing in mind – a win. This would guarantee Ryan Gregory and Tony Paul’s squad at least a place in the promotion play-off but importantly require the league leaders to turn over Sidcup who boasted the best defensive record in the league. Despite Chob being on a 15 match unbeaten run, sixth placed Havant though would be no push over. The season’s opener down on the south coast was a cracker and they were getting geared up for the Hampshire Cup Final so were keen to hone their game in readiness.

Chob’s team sheet showed the return of Ian Barnes at 9, with Mikey MacDonald switching to full back. Justin Rowland fresh from international duties took up a place on the bench. A cross field breeze offered no advantage and with the sun out and the going firm, the large crowd boosted by the Chobham mini rugby players guard of honour settled in for the afternoon’s entertainment. The opening minutes saw Chob move into the Havant 22 but a series of scrums and lineouts yielded nothing and allowed fly half Dave Sweeney to clear his lines. Chob though were looking threatening with a number of half breaks just failing to secure the final pass. On 7 minutes the first try came as the backs moved the ball through the hands before Macdonald entered the line at pace to touch down out wide. Alex Seers had a tricky opening conversion which just faded wide on the breeze. Chobham 5 Havant 0. Chob continued to probe as Havant struggled to get a foothold in the game. With the set piece secure plenty of ball was being provided and this created an opening for Josh Devitt to break through and his off load found the ever present Barnes who burst over the try line under the posts for the try. Seers’ conversion was a formality; 15 minutes played, Chobham 12 Havant 0.

With Chob controlling possession and territory it was surprising that the score wasn’t added to but dogged defence by the Hampshire men with hooker Steve Cruddas at the heart of their rear guard kept the home team at bay. The pressure told as Havant lock Harrison Young saw yellow on 32 minutes when he failed to roll away from the tackle 2 metres from his own try line and referee Mr Warren had little option but to reach for his pocket and flash yellow. Chob took advantage of their numerical superiority and Ollie Smith was able to break through two tacklers for a try under the posts. Seers added the extras. Chobham 19 Havant 0. With the half drawing to a close Devitt was able to evade a stretched H defence and add to the try count and secure the bonus point. Seers added two points. Chobham 26 Havant 0. Half time. Coaches Gregory and Paul were content with the first half having played controlled rugby and put points on the board. From past experience though Havant were going to come hard in the second half and despite a commanding lead it remained important to maintain the focus.

In fact the visitors started the second half well and put points on the board after 50 minutes. A good period of continuity allowed them to work an overlap with wing Jay Wilkes finishing off in the corner. No extras from Jake Reynolds. Chobham 26 Havant 5. 3 minutes later Havant scored again. Cruddas intercepted a pass in his own half and ran 40 metres before being snagged, this was enough to enable Ed Wilkes to receive the ball and cross the whitewash wide out. No conversion. Chobham 26 Havant 10. Was this the start of a Havant fight back? No Chob lifted their game and moved into the Havant half where showing great continuity the moved the ball to MacDonald to stretch over the try line to secure his brace. Seers missed the conversion. Chobham 31 Havant 10. Chob continued to press but with the result seemingly settled both teams started to focus on the following Saturday and when Mr Warren blew for full time there was a huge roar from the large crowd knowing that the first objective of a Chobham win had been secured. Chobham 31 Havant 10. Full time. Attention then switched to the other scores. With Wimbledon beating Sidcup, the focus turned to the battle in East London between Eton Manor and Colchester. A drawn game meant that Chob would be travelling across London to take on Eton Manor next Saturday in the promotion play off. They are very much an unknown quantity but this Chob team will go there in great form and on the back of a 16 match unbeaten run. This has been a wonderful season for Chobham with the large crowds enjoying their brand of exciting rugby. The coaching team will be working very hard to make sure that the preparation is spot on and that the chance for promotion to National 3SE is taken with both hands.