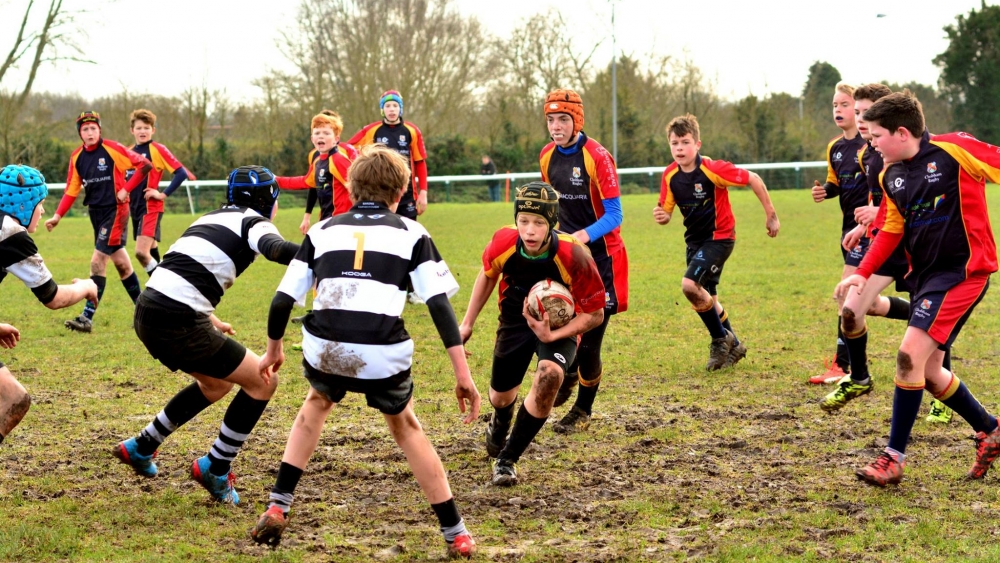 It was familiar opposition at Fowler’s Wells on Sunday morning for the U13As with their third match against Farnham.

The visitors had first use of a rare North wind and kicked deep into the Chobham half. With a short spell or aerial ping pong Chobham had a line out in their own 25. The wind disrupted the throw and gave Farnham a first attacking chance from a scrum. They made excellent use of this to score the opening try of first phase play passing down the line for one of the outside backs to go over on the left with a good conversion adding the extras for an early 7-0 lead. Farnham drove from the restart but then a poor kick for territory dropped straight to Adam out wide. This was returned into the Farnham half but the covering play brought him down and a lack of support meant a Farnham penalty.

The game settled into the familiar bruising encounter with both sides trying to bring their strong runners into play, with Farnham being drawn into a high penalty count at the breakdown with an improved rucking display from Chobham. A quick tap from one of these put Adam into space again down the left but the cover was again just up to it to haul him into touch just short of the line. Farnham also had their opportunities and from a Chobham penalty this time they again showed capable handling and ball retention to go wide out to the left before coming back right to score close to the posts. It was 12-0 with a missed conversion and Chobham would have it all to do in the second period.

It was Chobham defence required first though as Farnham attacked left with Al making a no-nonsense tackle to put the Farnham runner into touch. From a scrum soon after a break from Harry and a nice floated pass gave Jack room to pin his ears back on the right wing. Skirting a couple of defenders he was only 5 yards short when bundled into touch. This time it was Farnham who had line out trouble as Chobham turned it over. Harry darted left and then right before being tackled almost at the line. Theo was on hand though and with no defence on the short blind side he was able to barrel over for Chobham’s first score and the lead was cut to 7 points.

This was the cue for Chobham to up their game as the forwards carried hard at the Farnham defence who conceded yards to both strong running from Charlie and Connor, and penalties at the ruck. Eventually Dan was able to beat the first tackle and get into the second line of defence before quick recycling and a looped pass to Adam gave him enough room this time to cross in the corner and dot down about halfway to the posts. Sadly the conversion attempt drifted wide in the windy conditions, but it was now a ‘two point game’ at 12-10.

Farnham weren’t finished and had a chance to lengthen the lead again but the defence across the goal line through several phases was exemplary and Chobham were able to clear following a 5 yard scrum. The defence had taken its toll with TommyW having to make way, but with a short bench the call was made for Harrison to make his debut and give a good account of himself.

With time running out and Farnham pinning Chobham in their own half the Farnham 8 had a dart from the base of the scrum but was quickly brought down and good work in the dark arts at the breakdown meant Chobham came up with the ball to clear. The ref called last play as Farnham again infringed on the Chobham 25. A quick tap was taken and Jack was again in space on the right in front of two sets of anxious parents. Crossing into the Farnham half and the scrambling defence managed to close the door that briefly looked like changing the game and the attack was halted in touch on the Farnham 10 yard line.

So it was third time unlucky against Farnham with a 10-12 defeat against the side that won the league two weeks before, but some positives to take away, as well as looking to find a way to start the game the way it was finished.