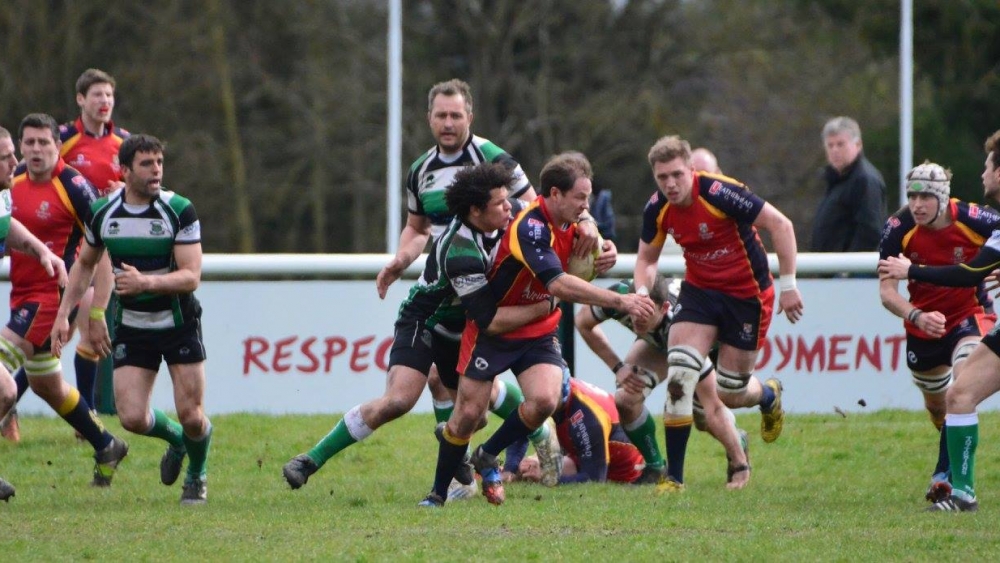 With Fowler’s Wells in party mood to celebrate the last home game of the season, Chobham knew that they had to do the business first out on the park. Given the mauling that Totts had given the men from Surrey way back in December, there was a steely resolve in the home camp to even the score.

On a chilly spring day, Chob were off to a flier as centre Oli Guy took the ball into contact and superbly offloaded out of the tackle to pace man Josh Devitt in space to scorch over for the try. No conversion from last week’s 50 cap Alec Thompson but a fantastic start. Chobham 5 Tottonians 0.

The game ebbed and flowed evenly but Totts were next on the scoreboard as Mike Searle burst through on 19 minutes. Brother Robbie added the extras. Chobham 5 Tottonians 7. 10 minutes later defensive frailties allowed Pierre Clark to cross the whitewash and Searle extended the lead from the tee. Chobham 5 Tottonians 14.

Was December about to repeat itself? No, skipper Tony Paul manned the barricades and stepped up to lead the tackle count and Chob bounced back. Totts number 8 Ieuan Williams saw yellow and a kick to the corner and a well-executed line out catch and drive allowed Jerry Rumble to touch down and with Thompson bisecting the uprights the score board showed a healthier hue. Half time; Chobham 12 Tottonians 14. The second half opened evenly but the returning Williams shrugged off forwards and backs alike as he barged over the try line to extend the visitors lead. Searle added the extras. Chobham 12 Tottonians 21. But back came Chob. Another line out drive proved undefendable and this time Ollie Wakefield came up with the score. No extras. Chobham 17 Tottonians 21.

Game on. On 62 minutes with Chob now in the ascendancy, they took the lead. Joe McVey showing power and skill in equal measure carried deep into the hearty of the green shirted defence before finding Devitt who roared in for his brace. Thompson was unable to add the extras but Chobham were back in front. Chobham 22 Tottonians 21. With 10 minutes left Totts showed great resolve and determination. Chob repulsed a series of attacks but were unable to break out from their 22. With the scoreboard showing 80 minutes Chob thought they had held out but despite the heroic efforts, Totts pressure told and after a series of close range probes, they were able to find space out wide to score with the clock well into added time. Final score; Chobham 24 Tottonians 26 So, disappointment to round off the home campaign and again so close to victory with the eighth losing bonus point being clocked up in 13 defeats showing the narrowness of margin between success and disappointment. Given the disruption through injuries this season, the on field experience of closing out tight matches through good game management has been missing although the positive of exposing more of the playing base to the challenges of 1st XV rugby will be hugely beneficial for the club in the long run.