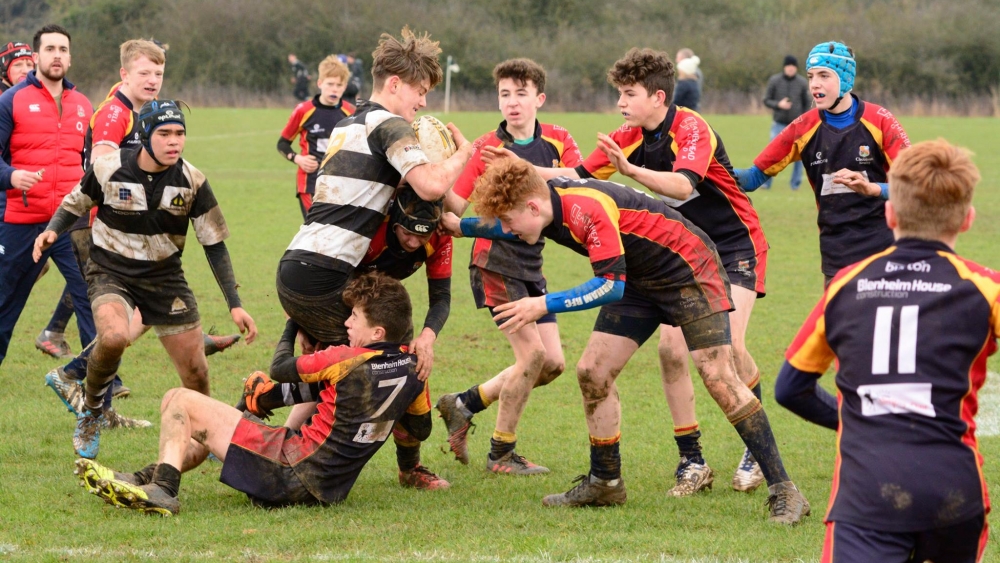 Match Report from Doug Mayger : The U14 Bs continued their recent winning form with a fine win over visitors Old Caterhamians A on the main pitch at Chobham. Playing against a bigger side the Chobham boys showed themselves to be technically superior. A growing maturity within the squad in figuring out on the hoof what is working and what isn’t building the foundations for the win.

Up front the forwards with Harv at the helm ensured a steady supply of clean ball at the breakdown for the back line to exploit. The three-quarters were pretty ruthless in finishing from positions the forwards won for them.

The clean sheet was ensured by Tom McG putting in a couple of tackles late on, to the delight of his team mates. Tries came from Wyatt (3), Jonesy (2), Sammo, Harv, with the extras added by DanP (2) and Watto giving a final score of 41-0.

Meanwhile, over at Farnham the As were looking to extend their unbeaten season into February. Also playing in front of the clubhouse but on a heavy pitch following lots of overnight rain, it would be the usual form in games between these two familiar opponents. Points would be at an absolute premium as defence normally holds the upper hand over attack.
In the early minutes Chobham looked to play a passing game, while Farnham employed the kick from fly-half for the winger to chase. This paid dividend once when a lack of bounce in the soggy patch around halfway foxed the covering defence and the winger was able to make headway into the Chobham 25. Strong Farnham rucking kept the move alive but strong tackles from Jack, Doug and George kept the gains to a minimum. Eventually another chip over was gathered and mark was called to relieve the pressure. Chobham maintained the territorial advantage if not possession with defensive pressure keeping Farnham on the back foot. Occasional breaks from Farnham were let down with loose or spilled passes out wide preventing any momentum mounting.

Deadlock was broken as Chobham pressure forced the Farnham 10 to kick left again. Jack was first to the ball in the 5 yard channel, catching it on the volley to lace it way back towards the Farnham line. Following up put him behind the Farnham defensive line, and eschewing his family heritage didn’t cross it to the far post for the big centre forward to nod home, got another controlled boot to the ball and grounded the ball just before it rolled dead.
The game continued to ebb and flow either side of the halfway line as neither side were able to make significant gains through resolute defence, Al putting in several crunching hits, as if a replay of practically every game between the sides in recent seasons.

A quick passing move from first phase gave Andy, on a well-earned debut, the chance to show his pace, making it to the Farnham 25 before the defence closed him down and the game came back to the central third.

Farnham made a better fist of a lineout to the front man than England had managed the previous day, but Callum was alert to the break and tackled his man into touch. The half ended with Chobham ahead by a single unconverted try. The second period began with Chobham pinned into their own half as Farnham continued to boot to ball and force the back three to clear. From an attacking lineout a driving maul got close and the home side worked the short ball infield. After several phases a gap appeared in the defensive line appeared and a Farnham forward bundled over under the posts to give a simple conversion chance and give them a 7-5 lead.

Following a ref substitution and Lawrence picking up the whistle, Chobham now had to take the game to Farnham, but with committed defence from both sides a spell of kick tennis broke out and the boys struggled to exert the pressure that might force a score.

Farnham’s territorial game continued allied to strong rucking forced Chobham to have to play from deep and a penalty was given away 7 yards out in the right hand corner. Farnham opted to kick to touch rather than play the penalty, and duly went for the catch drive that would seal the win. With the uncontested line in force this season the driving maul duly appeared. Under the severest of pressure the Chob pack held firm and a Farnham player was isolated after breaking for the line and was pinged for hanging on.
A clearance to the 25 yard line, and a mazy run from Connor carried Chob back to halfway and a Chob scrum. With the kick looking to put the Farnham back three under pressure for once a couple of tackles were missed and Farnham ran it back to the Chobham 25. With the intensity reaching boiling point Chobham conceded a penalty and Farnham looked to go one better from (yet) another driving maul. Once more the defence were having none of it and won a vital penalty. With the clock running down a quick tap and go, followed by a hack into space behind the defence gave Chobham a final chance to hit back. With play finally in the Farnham half for a couple of minutes a couple of attacks were snuffed out before a kick chase down the right touchline raised hopes of maintaining the unbeaten run, but Farnham managed to steal the ball deep in their own territory and kick for touch.

So a final score of 7-5 to Farnham, probably just about reflected the play with almost nothing between the sides and 100% commitment to the cause from both squads.