Chobham U16s had two home fixtures on Sunday. Recent form had been mixed with the B squad securing two well-earned victories over Farnham and Tadley As, while the As had been on the receiving end of a chastening home defeat to London Irish. Most recently though a squad of players across the whole age group swept to victory in the touch tournament the previous morning, celebrating in style at the Supporters Lunch. 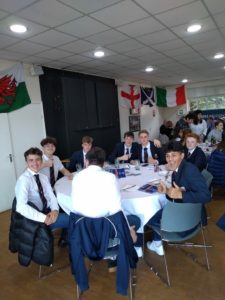 It was the B fixture first against Staines. Any lad about town in the Egham area knew this was an important fixture, with bragging rights to be had. No quarter was to be expected or given. The clubs most junior members from the U5s and U6s provided a tunnel as the older boys took to the field.

The opening minutes were all Chobham, with the wind at their backs, pinning Staines back in their own half. The opening score came from an attacking 5 yard scrum, Saxon picking up at 8 and barrelling over out on the right hand side. The conversion slipped wide, on a difficult day for kicks no conversions were successful, but Chob’ had a 5-0 lead. Staines surged back and soon made a break in midfield after sucking in the defence around the fringes. Daniel had to make a try saving tackle at fullback. A penalty was conceded at the breakdown though and Staines reacted first with a ‘tap and go’ eventually getting over in the corner.

Back on level terms then and Chob’ had to work had with the elements in their favour before the break. The latest Chob’ debutant George was introduced during this spell chasing hard to keep the visitors trapped in their defensive end, with Samuel helping out Staines following an injury. Try as the hosts might, with both forwards and backs trying to break through the Staines line held firm, Ben held up right in front of the posts being the closest to a score.

The Staines kick was too deep and gave space for the home forwards to drive into the heart of the Staines defence. This tactic soon bore dividends from a stolen lineout by Harvey. The forwards kept the ball tighter playing into the wind and recycled well. Jules drove into the visitors 25 to earn a penalty. In very similar circumstances to Staines effort a quick penalty took play almost to the line and it looked like Harrison made the decisive final yard to push Chob back into the lead.

As the second half progressed Staines started to get the upper hand in both territory and possession, with Chob’ on the back foot but keeping Staines away from the whitewash. Staines eventually began to run out of steam and Chob were able to turn defence into attack from a missed touch kick. Neat hands from Daniel and Ewen gave Harvey room to drive into Staines territory. On the attack rumbled, finally halted by a penalty 5 yards short. Once more a tap penalty reached Matt who was brought down a yard short. Teo was following closely and added a third try with a swan dive over the whitewash.

With a 10 point lead Chob went after further points but it was Staines who scored the final try. A lineout on the home 10 yard line was worked well through several phases, ending up out wide once more reducing the final margin to 15-10 and a hatrick of wins for the Bs.

The rain was now falling steadily as the As entered the fray for their latest Harlequins Cup group match against Old Rutlishians. The As also played with the elements first, and were soon pressing for an opening score. The first opportunity fell to Chris with a gap in the defensive line opening up. He made no mistake and was under the posts, adding the conversion for a 7-0 lead.

The home side continued in the same vein, but either through the conditions or not quite releasing a player into space to capitalise on the opportunities. After 15 minutes Harry managed to winkle the ball out of a maul and Chob were closing in once more. A kick behind the defence took a home bounce and Tommy was able to collect it and reach over for a 12-0 advantage.

The match continued, with Chob’ searching for the fluency that would turn possession into points, but Rutlish started to get to grips with the Chob’ style of play. Three Chobham lads in the Rutlish side (Ewen, Harrison and Harvey) were giving their all in both defence and attack as the half continued. Right on the whistle Chob’ had to defend across the line to keep the visitors out. Rutlish were able to force their way over the line finally to reduce the half-time lead to 12-5.

Rutlish began the second period in similar style and Chob had to dig deep once more to keep them at bay. This time they succeeded and Ruts were held up and Chob’ had a relieving scrum. Chob’ began the long march to other end of the field with a clearing kick to the host’s 10 yard line. The lineout gave another scrum and first Fin then Olly got in behind the Ruts defence. The defence was scrambling and Chris was able to cut inside with Rhys outside pulling the last defender wide to create the gap. A second conversion took the score to 19-5.

Chob’ continued to have the possession advantage but couldn’t create an opportunity for the bonus point winning try. Time was ticking away as Rutlish had a 5 yard scrum near their line. Aran was safe as houses under the clearance kick, and opened up the counter with Fin, Chris and Adam all involved before Tommy crossed for his second to take the score to 24-5.

A fifth try was added straight from the restart as the forwards took turns to carry to the visitor’s 25. MattN got to within 5 yards and Aran was able to walk the ball in with the defence overstretched. Chris added a final conversion and with one final defensive shift on their line as Ruts tried manfully to end on a high, Chobham were able to close out the match with a 31-5 victory.

This weekend the boys welcome Tatra Smichov from the Czech Republic on Saturday lunchtime, and then host Bishops Stortford on Sunday.