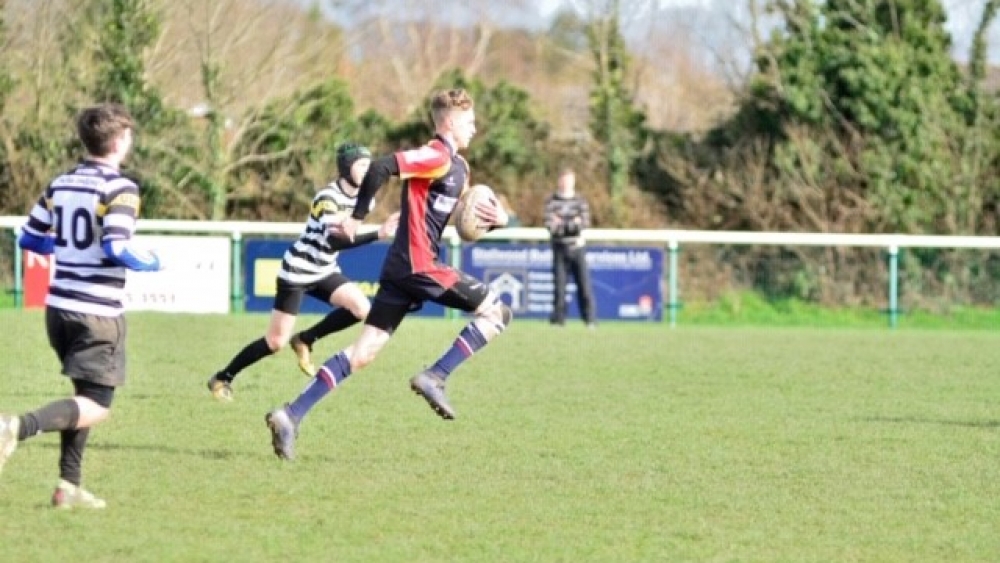 A mixed squad of Chobham U16s hosted Tatra Smichov on Saturday, a team from Prague in the Czech Republic. Our old friend Diego is now based in Prague and this fixture was arranged as part of a pre-season tour for TS with their season being the Spring and Autumn months. The visitors were fresh from a weekend training session at home and a session with Quins the previous day so were looking to put what they had learned into a live game.

TS kicked off and the opening minutes were back and forth as neither side could maintain any extended possession. Chob’ had the territorial advantage for the most, and a crosskick led to a TS lineout deep in their own 25. TS won their own ball but it was allowed to bounce around on their own line. Teo was the first to react and pounced on it to open the scoring with the hosts taking a 5-0 lead.

At the restart a grubber kick down the touchline looked to pin TS in their own half once more, but a knock on led to a scrum to the visitors. It became clear that part of the messages of pre-season was close support play and keeping the ball in hand. TS made good ground with short passes committing defenders, a tactic used to good effect all match. A TS lineout again worked to Chob’s advantage as a loose throw was hacked downfield and Chob’s chase put the defence under pressure in their own 25. Chob’ won a turnover and a chip over from Gideon took a very friendly bounce and Aran leaped above the TS full-back to double the try count. Gideon added the conversion and the lead was 12-0.

The visitors continued to play their game and by forcing a couple of penalties were in the Chob 25 for the first time. A loose pass from Chob in the middle of the park was neatly picked up by the TS centre and he ran in under the posts to peg the score back to 12-7.

Chob’ were stung by this score and immediately struck back. A kick away from the forwards ended in a TS scrum in defence. Pressure on the scrum-half led to a turnover and Charlie popped up to make the scoring pass to MattW wide out in the far corner, restoring the 10 point advantage.

There was still time for another score before half-time as TS pressed again. A break in centre field looked enough to hit back, but Saxon recovered to make a tackle. The support was quickly on hand and TS scored in the corner themselves to bring the score at the turnaround to 17-12.

Opening up the second half TS started to get their big ball carriers into play as much as possible. The hosts had to make a trademark backs to the wall defensive stand to keep them out as TS battled to draw level. The defence finally won a vital turnover and the lines were cleared and Chob’ set about working up field for the first time in the second period. A Chobham break was intercepted 5 yards from the line and Tatra recovered to the 25 yard line before Chob’ again won the ball at the breakdown. A second kick through for Aran to chase was safely bagged and Chob had a 10 point advantage once more.

Chob’ then put together their best spell of play immediately from the kick-off. Lewis pouched the kick and set up play nicely for the back line to attack. Good forward support ensured the ball was recycled and a stretched defensive line was breached by clever passing between forwards and backs before Olly finished off the break. Chob’ were now 27-12 in front and Chob’ were able to try some new combinations as Harry stepped up from full-back to scrum half.

To their credit both sides showed real attacking intent as the game ebbed and flowed, the keeping kept to an absolute minimum. It was Gideon who broke the game with an interception in the middle of the park, and too much pace for Tatra to bring him down. 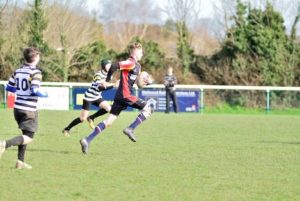 Tatra stuck at their task using big runners to break the line and using close support to capitalise on any gaps. From a penalty the crucial escape was almost made but GeorgeC managed to get a timely hand on a pass while scrambling back to limit the damage. Chob’ had a couple of attacks of their own but the visitors tackling was up to the task, the full-back in particular bringing Olly down as he burst through.

Chob’ did get on the scoresheet once more, from a scrum on the TS 25. Anyone of a certain age might remember the old Chobham ‘Lynagh’ move pinched from the ’89 Wallabies against the Lions. Gideon ran the full-back line in very similar style to score under the posts, adding the conversion to extend the lead to 41-12.

Tatra’s tactics bore fruit soon after however as the number one ball carrier broke through and passed to a team mate with real pace outside him to add a third visiting try. 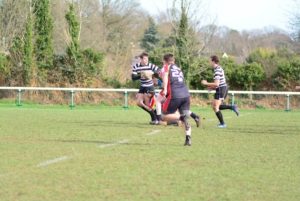 With the clock running down Chob had one possible score ruled out for a knock on right on the line before a win against the head at a scrum in the Tatra half was moved out to MattW on an overlap and with plenty of space to add the final points of the match at 46-17.

The final couple of minutes saw Tatra trying to play out from deep, but the Chob’ defence kept them out of the danger area.

The final whistle blew on a thoroughly entertaining fixture as everyone settled in to watch the Six Nations on the big screen. Our guests finished their tour with a trip to Harlequins v Gloucester on Sunday before heading home for their first fixture at the end of March, “Nejlepší přání pro novou sezónu” from all at Chobham, I hope! If this is something inappropriate then blame Google!