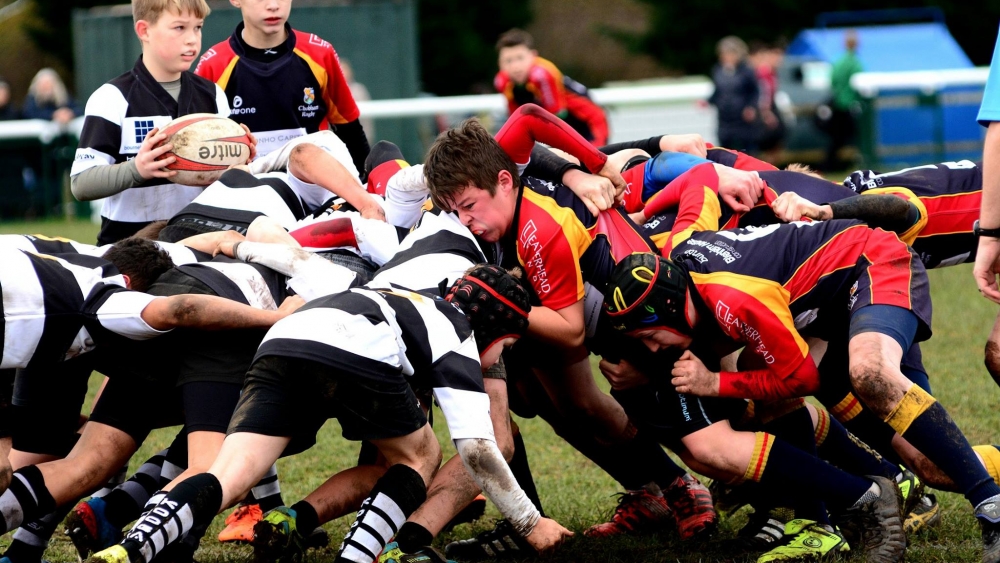 Match Report from Doug Mayger : Chobham faced Farnham in their latest league fixture, buoyed by a comfortable five try victory over Teddington. Adam, Connor, Gideon, Dan and a flying dive from Fin were the scorers and all were in the squad again.

Chobham kicked off and Farnham quickly made inroads into the Chobham half before being pulled up for crossing in midfield to allow a clearing kick to touch. The opening minutes were the usual physical battle with Farnham, with no quarter asked or given. A killer tackle from Al on the Farnham inside centre brought another penalty which put the home side well into opposition territory for the first time in the match. A catch and drive set up a good position but the ball popped out of the ruck illegally and the chance was lost. A further good opportunity was set up by a cross kick from Danny to put the winger under pressure almost on his line but the defence was solid and play was cleared to the 25 yard line.

Farnham opened the scoring minutes later when a pick and drive from a ruck was turned over and quick passing worked the ball to the left wing around halfway. Pace and too high attempts at tackling meant the winger was able to squeeze down the touchline and over the line, having the space then to touch down under the posts and give an easy conversion for a 7-0 lead slightly against the run of play. This sparked Farnham to raise their game and a second score wasn’t long in coming. From a scrum just inside the Chobham 25 yard line slick passing moved the ball first right, and then from a quickly won ruck back to the left for the try to be scored wide out for a 12-0 advantage.

It was Chobham’s turn now to lift the intensity. The restart was put under pressure and kicked only to Chris at fullback who made ground before Adam took over. Smart work at the ruck was rewarded with the backs in support as Connor popped a pass inside to George who got an offload to Max in the tackle and then on to Connor to finish off wide out on the right, reducing the deficit to 12-5 at the break. The second half began with Chobham on the attack again. A safe catch and good hands along the back line took play into the Farnham half before the forwards took over finish off the job. Farnham were resolute again in defence and only a 5 yard scrum was the reward. A blind side break was held and Farnham were able to clear their lines.

The second half then settled into a similar pattern to the first with strong tackling keeping opportunities to a minimum.

Farnham again scored first in the half in slightly fortunate circumstances when a chip over the defensive line rebounded into a Farnham players hands and some soft tackling allowed him to gallop away to score out wide again to restore a 12 point lead at 17-5. Into the final quarter and it was down to Chobham to make the running. After Farnham had attacked wide down the left from the restart, A solid scrum and quick hands gave Adam space to turn on the afterburners. The covering defence eventually brought him down just 5 yards short at the expense of another scrum. A back-row pick took the ball to within a yard or two, and Oli was on hand to make the final few feet with the rest of the pack driving him home. George made the kick and the gap was down to 5 points.

Both sides jockeyed for position and another score that would probably decide the game. A rare win for the front row against the head started a move which earned a penalty after Farnham were pressured finally at the breakdown. From the resulting lineout a catch and drive, with Charlie dragging the maul 10 yards into the Farnham half was eventually called a Farnham scrum.

With only seconds remaining another quick handling move gave Adam room on the left. The scrambling defence did just enough to force half a toe to brush the whitewash and the flag went up. The ref blew for full-time and for the third league game in succession Chobham were beaten by a team scoring 17 points.

So, a losing bonus point at least, but only one more league game to post a victory with the trip to Guildford on 6th February, the other side yet to record a league victory.