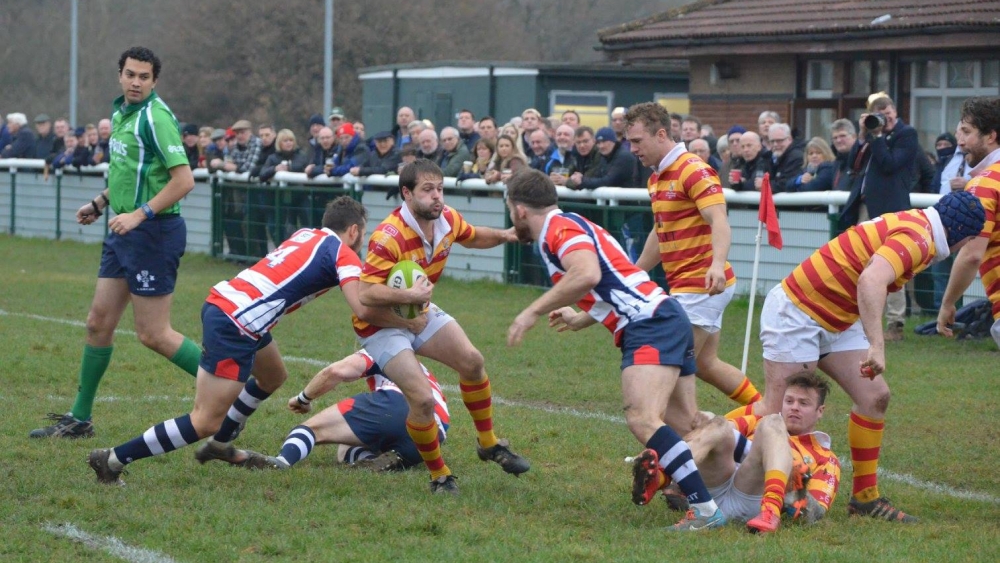 ‘Basalt Global’ sponsored Chobham hosted bang in form, second placed, Havant, but head coach Ryan Gregory would have preferred not to have to accommodate 5 changes from last week’s outing at Totts. Havant arrived at Fowler’s Wells fresh from a thumping win against Cobham and full of confidence. With the club’s veterans, the Chobham Martyrs, hosting their annual lunch, the touchline was packed and in good voice. Against a dull but dry back drop, Chobham started well earning an attacking 5 metre scrum following a break by Ollie Smith and a kick through by Ryan Gregory. With possession being retained the opened salvos were played exclusively in the visitor’s 22 but resolute defence kept their try line intact and a missed penalty from the returning Alex Seers was all that Chob had to show for their early endeavours. On 8 minutes Havant opened the scoring taking advantage of a poor Chobham lineout and seeing hooker Jerome Trail barrel over for the try which Joel Knight converted. Seers narrowed the gap shortly after with a well struck kick as the Havant penalty count continued to rise but with the usually reliable Chobham lineout malfunctioning the opportunity to make the visitors pay for their indiscretions was frustratingly lost. Probably against the run of play, Havant extended their lead on 15 minutes when fly half Wayne John threw a dummy which the Chobham defence bought and he cruised over for a converted try. Chob again responded but the visitor’s physicality at the break down gave them the edge and disrupted possession for the home team. Seers punished another indiscretion on 30 minutes and as the visitors’ discipline frayed, Havant lock Mitch Goldring saw yellow for an unnecessary late hit which was out of keeping with the spirit of the contest so far. Half time Chobham 6 Havant 17. With parity in possession and territory, the half time scoreboard did not necessarily reflect the Chobham efforts but credit must go to a well organised Havant defence. However Chobham needed a real improvement in the set piece and in the contact area to get a foothold in the game in the second half. Again Chobham started well with last ditch tackles denying both Alec Thomson and Harry Guy just short of the line, but Havant then showed their qualities with two tries in 3 minutes. The first came from the increasingly influential Knight with the second and bonus point try coming from wing Jay Wilkes with Havant using the platform of a strong scrum to open up the Chobham blind side defence. Chobham didn’t lie down and the arch poacher Josh Devitt was on the end of a misplaced Havant pass to race under the posts to narrow the deficit with Seers adding the extras. Then Knight taking advantage of being given too much space and time responded on 75 minutes with a neatly taken try but again back came Chobham. With Havant prop Tom Blackburn taking a team yellow, lock Gregory was driven over to secure a consolation try for the home team. Final score Chobham Rugby 18 v Havant 36.

Despite seeing plenty of ball in the right areas, Chob were up against a side which showed greater physicality on the gain line and an attack that was ruthless when it came to executing opportunities. With a settled side and strength in depth Havant certainly look a good bet for being in the promotion stakes come April. Chob will need to regroup, focus on getting the set piece back to previous standards and finding more directness in attack before the short trip to Chiswick next Saturday.