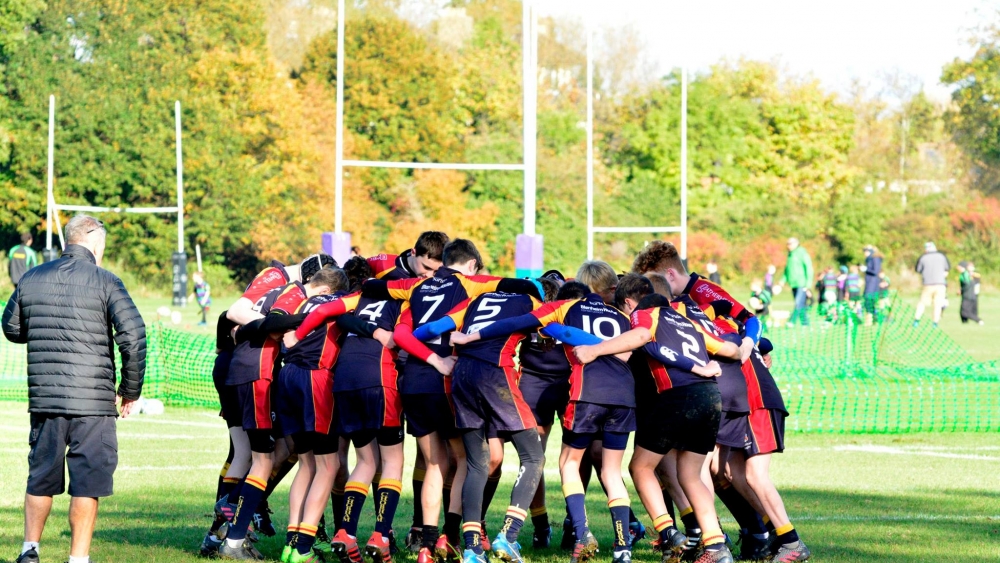 Match Report from Doug Mayger : Chobham U14 As broke new ground on Sunday with a trip to Weybridge Vandals. Kicking off into a bit of a breeze the restart routine worked well with the Vs catcher being wrapped up. Vs held possession though and won an early penalty at the ruck from which a quick tap, a feature of their play throughout, pushed Chobham back. In contrast to previous matches this season it was the opposition who were on the front foot for the opening minutes and the fullback was able to break the line and a couple of tackles to score the opening try, the first conceded in round robin games this season. A good conversion gave Vs a 7-0 lead.

Again the restart drill was good and the ball almost re-gathered but Vs were awarded a scrum. Chobham established parity and play nudged either way around centre field with neither side making a decisive move. With around 15 minutes gone George made a blindside break from stand-off and took play to the Vs 25. Vs again declined to kick clear and good pressure in the backs won Chob a scrum in good position. A pick at the base from Reece and deft handling with backs and forwards interlinking drew a penalty. The tap was taken quickly and Gideon put Harry into space with a miss pass. With Strictly Come Dancing footwork he was over in the right hand corner. Chris levelled the scores at 7-7 with a great conversion.

The game settled back into a familiar pattern with the defences having superiority and the kick option coming more into play. Finally Adam on the left wing had a bit of space to open up and made 40 yards thanks to a hand off on his opposite number. Chobham started to tighten their grip on possession as the half came to a conclusion and were rewarded with a second try before the whistle. Tommy started the move and good work from the rest of the pack made sure quick ball was won with Connor on the end of a couple of passes to finish off the move, this time too wide for the extras making the half-time score 12-7 to Chobham. Into the second period and both sides had clearly had the same instructions as the intensity into contact was raised a couple of notches. Both sides tried to work the pick and go, with aggressive rucking, to create the opening score of the half but neither defence was giving anything away. Tempers were getting frayed as both sides played on the limit and the penalty count started to rise.

Vandals looked to have taken a good option of the chip kick from a scrum, but Jack had other ideas. Charging forward from 15 and facing three Vandals tacklers he lined up a gap before catching the ball and bursting through and into Vs territory. Vandals were on the back foot all of a sudden and scrambling to get across, but to no avail as Jack had the pace to round the cover and dot down under the posts leaving the simplest of conversions and a 12 point lead.

The game was very much in the balance now with Vandals having to score next or it would be all over. With a couple of games within a game breaking out across the field they forced Chobham back to their line. Chob couldn’t quite emulate England’s 22 phase goal line defence from down under and Vandals managed to get over the whitewash. The defence had forced play wide and the conversion was missed. Chobham were pinged at the restart giving Vs the chance to work back down field. A poor kick however missed touch just outside Chobham’s 25 and the backs set about playing back up field. A tackle just in the home sides half set up a ruck and the forwards cleared out giving Reece the chance to attack to the 25 yard line. Great support kept play alive and moved out wide. A delayed pass from Dan to Adam almost reached the line before a return pass and support from Tommy popping up on the wing finished off the play of the game. Chobham had re-established a two try lead.

Vandals were now under time pressure and a spilled lineout gave Chobham a scrum. A deft grubber kick from Doug was gathered by Jack, and Harry was on his shoulder to get into the red zone. Pouncing on the ball after it had been batted out of a pair of Chobham hands a couple of simple passes gave Connor his second score just as the defence dragged him down. Chris added the conversion and Chobham were finally decisively clear at 31-12 with moments to go.

Credit to Vandals, they came back at Chobham forcing play into the Chobham half through a penalty. Taking the lineout and using pretty direct running the defence was breached again on the final play of the game making the score 31-17 as the referee called no side.

So, a different kind of win this time, having to come back from an early deficit, but there was plenty of fight in the dog as the boys played their way back into the game before moving steadily clear in the second half.