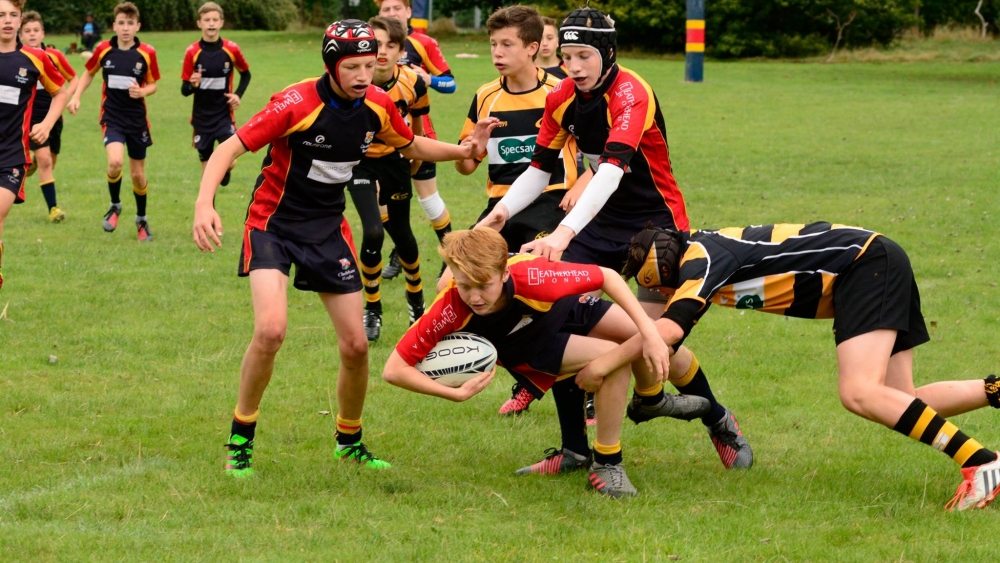 by Chobham
with no comment
Chobham NewsJunior RugbyMinis Match Reports

Match Report from Doug Mayger : After an all too brief time to prepare it was straight into round robin (the league that dare not speak its name) action on Sunday. As with last year Camberley were the first opposition, this year on the newly extended orchard pitch. With Danny going down injured in the warm up it was down to the squad of 17 to reverse a narrow defeat to the same opposition last season.

Chobham kicked off uphill and uncertainty on the visitors’ part meant Chobham gathered the ball and earned a penalty that was kicked into the 22. The first lineout was won safely under the laws and Chobham were moving forward again. Camberley resistance was strong and the early exchanges continued to ebb and flow in the visitors half. As the half progressed Camberley were able to use the slope advantage and were able to make inroads into the home half, but without mounting any serious attacks on the try line. With around 15 minutes played Camberley had a scrum about 10 yards out with a wide blind side. The break went that way but Adam made the tackle and as the play was worked back in field Dan was on hand to make a tackle and Doug was in to rip the ball away before the ref awarded Chobham a scrum.

Under pressure Harry was able to make a clearing kick which was returned to Jack at fullback to return with interest after winning a penalty and the kick was pushed into the Camberley half. Camberley regained possession and looked to work the ball wide but a slip was pounced on by Chris with Connor on hand to drive forward. Possession was conceded after a couple of phases but the home side kept on the front foot in defence and rucked well to keep Camberley penned in their own half. As time ran out Oli pinched a ball at the ruck to release Tommy and draw another penalty but the whistle blew before anything significant could be created. With the slope in their favour after the break Chobham were immediately on the offence from a good kick down field which Camberley then kicked straight out. With the new lineout requiring quick hands Charlie and MattN figured out a low pass in and quick release to the scrumhalf would guarantee possession. Reece popped up at centre on the crash to make it to the 22 where more quick rucking worked the ball left again before a forward pass halted momentum temporarily halted the attack as Camberley got to halfway. MattW got to a Camberley tap and the backs were on the rampage again going close but conceding a penalty on the deck. It was a blue tide down the hill now though as first Connor was held just short of the line and then an attacking maul under the sticks could have been a score but the ref was unsighted. From the 5 yard scrum Harry was bundled into touch right on the line as the Camberley defence was stretched to the limit. It was finally broken shortly after as a clearance to Jack at fullback gave him room to arc to the right and this time Harry squeezed in the corner after more solid rucking and George releasing the backline to move the ball through the hands right across field. The kick from the touch line was missed so it was 5-0. Fin gathered the restart and drove into the Camberley half once more setting up the space for a great chip kick from Gideon down the line. With Camberley now having to create under extreme pressure the mistakes started to come and a spilled pass was hacked downfield to the 25. More terrier like tackling kept them right down under their own posts and again a steal at the tackle allowed the overlap on the right for Connor to get over for a second and decisive try and a 10-0 lead.

Into several minutes of injury time now as a result of unfortunate knocks to two Camberley players and Chobham continued to keep the pressure on. Camberley tried to get a consolation but Harrison was involved in the final play of the game from another jackal at the tackle but couldn’t get to the line. So full-time and a very mature performance right through the squad sets them up for another local game next Sunday at Reeds.